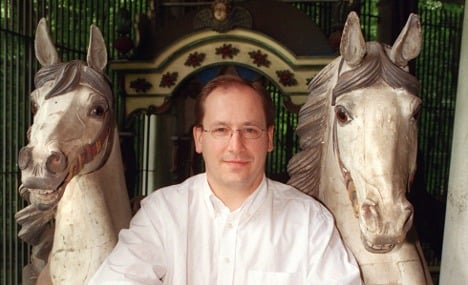 The idea to form an association to restore the much-loved local landmark at the historic Wilhelmsbad spa and gardens was formed after discussion among friends at a local pub in 1989 and now has more than 260 members. Since then the group has raised almost half a million euros in their spare time.

The 18th century merry-go-round will soon be back in business after two more years of restorations.

“What we collect is doubled by the local council of Hanau and the state,” said chairman and founding member Stefan Bahn. “We are happy that the Hesse authorities recognised the worth of the carousel.”

On Saturday in Wiesbaden the state of Hesse honoured the association with its preservation award for their work to save the amusement ride, which suffered severe damage over the course of its 230 year existence.

Commissioned by 1780 by Wilhelm I., Elector of Hesse, as part of the Wilhelmsbad park, the complicated ride has had a turbulent history.

“At the very beginning, the carousel would have been pulled by local serfs,” said Eberhard Schmitt, a retired member of the carousel restoration association. Later the mechanism was powered by oxen, which allowed it to move faster.

“Back then the women in their narrow corsets fainted because of the speed that the oxen could turn the carousel,” he laughed.

Visitors flocked to see the amusement ride, although not all could afford to experience its thrills, with one ride costing 24 Kreuzer, it was “more expensive than a night in the most expensive hotel,” according to Schmitt.

The carousel was visited by many notable personalities, including King Wilhelm III of Prussia and Kaiser Franz II of Austria.

Its last revolution was in 1929. Later it was severely damaged and during the Second World War. In 1970, twelve of the 16 wooden horses adorning the carousel were stolen, a feat that would have required something close to a five-tonne truck, estimated Schmitt. The thieves were later caught and jailed.

The current phase of restoration is focusing on supporting the 16-metre high domed roof and restoring the wood surfaces of features such as the wooden horses and carriages. Despite its long history, the carousel still remarkably possesses most of its original parts.

“Two of the horses are already completed and on display in the Fürstenbau historic building – many people have been asking about them,” said carousel restoration association head Bahn, who as a retired architect has taken a special interest in the structure’s complex workings.

The carousel is scheduled to be fully restored in the next two years, and will be fitted with an electric motor to spare the oxen and serfs of modern Hanau.

“The carousel in Wilhelmsbad park is inseparable from the history of the town of Hanau,” said Gerd Weiß, the president of Hesse’s historical preservation authority.

“Without the carousel the park wouldn’t be what it is today – a historic amusement park and attractive free time location beyond Hanau alone.”