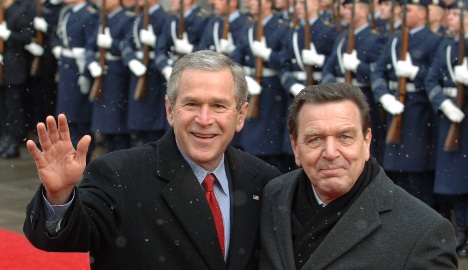 “Former American President Bush is not telling the truth,” Schröder said in a statement released late on Tuesday.

Bush said in his memoirs that he told Schröder in an Oval Office meeting in January 2002 he was determined to make diplomacy work but cautioned that while the military option was Washington’s last choice, he would use it if necessary.

“What is true of Afghanistan is true of Iraq,” Bush quotes Schröder as saying. “Nations that sponsor terror must face consequences. If you make it fast and make it decisive, I will be with you.”

Schröder was against the March 2003 invasion, stridently rejecting what he branded a military “adventure”, and his opposition is seen as one of the main reasons for his re-election in September 2002.

“I continued to work with Gerhard Schröder on areas of mutual interest. But as someone who valued personal diplomacy, I put a high premium on trust. Once that trust was violated, it was hard to have a constructive relationship again,” Bush says in his book “Decision Points” released on Tuesday.

Schröder confirmed that he had told Bush that he would “stand reliably on the side of the US” if it was confirmed that Iraq was sheltering those responsible for the September 11, 2001 attacks.

“But this link, as it became clear during 2002, was false and contrived. This goes for reasons (for the invasion) given by Bush and (vice president Dick) Cheney too.

“As we know today, the Bush administration’s reasons for the Iraq war were based on lies.”

France’s then-president Jacques Chirac also opposed the war, and a deep transatlantic rift ensued until the end of Schröder’s tenure and the election of Angela Merkel as chancellor in 2005, when relations began to thaw.