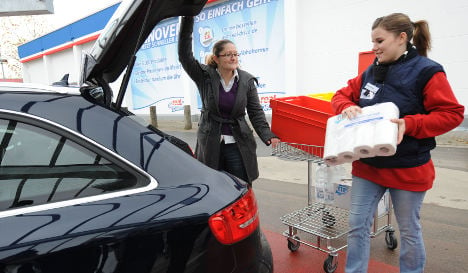 The Real supermarket chain opened Germany’s first drive-in in the Isernhagen district near Hannover on Tuesday. The Rewe supermarket group, meanwhile, has just announced it will launch drive-ins in two or three major cities next year.

At the Real supermarket, customers will make their selections online, then pick up their order at a collection point. The customer pays €1 per order as a surcharge. Otherwise there is no difference in price, the spokesman for the chain said on Tuesday.

The new outlet is a trial for what could become the norm nationally. Should the test prove successful, the supermarket chain plans to build drive-in supermarkets across Germany.

Rewe will test two different styles for drive-in grocery shopping, to see which option customers prefer. Either they can order their shopping online and pick it up themselves, or they can have it delivered at a charge.

The Rewe boss criticised the running price war in the grocery business as collective suicide for the sector, saying he expected another round of price cuts. But there was little room to actually lure more customers or boost the volume of sales, he said.

Rewe was not interested in predatory pricing but “we have to join in,” he said, otherwise customers would drift away. In the past few days grocery discounters had cut prices on many products for the eighth time this year.