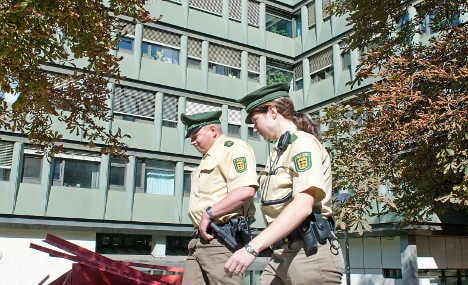 Officers in front of the Stuttgart courthouse. Photo: DPA

Martin S., who has acted as one of two Schöffen or “lay judges” in the case for the past two months, has been deemed unfit to assess evidence impartially, especially testimony given by police officers.

The 59-year-old recently called police officers “idiots” and “shitheads” after they found him drunk and asleep on a street in Stuttgart in the state of Baden- Württemberg. He went on to tell the officers that he was a lay judge in the Winnenden trial and said they should “be careful or they would regret it.”

Under Germany’s legal system, trials sometimes use such lay judges alongside professional judges – an approximate equivalent to having a jury.

Martin S. was a lay judge in the weapons negligence case against the father of Tim Kretschmer, the 17-year-old who went on a shooting rampage in March 2009 at his former school that left nine pupils and three teachers dead, mostly with execution-style shots to the head. A further three people lost their lives in a dramatic chase and shoot-out with police before Kretschmer turned the gun on himself.

Kretschmer used his father’s 9mm Beretta pistol, which the father kept in his bedroom at home. Baden-Württemberg state prosecutors charged Kretschmer’s father in November 2009 with 15 cases of negligent homicide and a further 13 cases of negligently causing injury, on the grounds that he had left the gun and ammunition unsecured in his bedroom. He legally kept more than a dozen weapons in the family home.

After Martin S. drunkenly abused the police officers, the state prosecutor filed a prejudice complaint against him. The lead judge in the case, Reiner Skujat, agreed the juror’s behaviour “far overstepped the tolerable limits.”

The trial will continue with only one lay judge.

Of major concern was the fact that Martin S. had fallen asleep in the street with a briefcase containing charge sheet against Kretschmer’s father, a list of victims and injuries, and 78 pages of hand-written notes on the case.

The sacked lay judge had “massively” insulted police officers, Skujat concluded. Because he could hardly walk, he was put in a cell by police to sober up. The police charged him with verbal abuse.

The judge said Martin S. had apologised for his remarks and stressed his “lapse” would have no influence on his ability as a lay judge.

But the judge saw it differently: “The law puts the same demands on a lay judge as a professional judge,” Skujat said.

The doubts expressed by the state prosecutor as to Martin S.’s impartiality, especially when it came to testimony by police officers, was well-founded, Skujat concluded.

The court added that until the drunken incident, there had been no clues that Martin S. was unfit to act as a juror.

On the most recent trial day, October 28, the trial was unexpectedly interrupted. The court had “procedural reasons” for the delay, but did not elaborate.