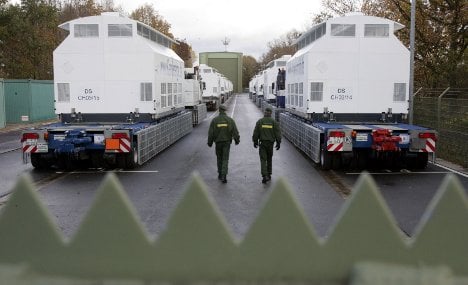 While authorities loaded the cargo on lorries for the 20-kilometre (12-mile) road trip to a storage facility in Gorleben, northern Germany, some 1,500 demonstrators, including local farmers with tractors, blocked the route.

After a dramatic day of cat-and-mouse on Sunday, during which some protesters fought pitched battles with baton-wielding police, the nuclear train finally crawled into Dannenberg early Monday under heavy security.

Police said it would take as many as 15 hours to transfer the waste from the train on to the lorries, setting up a likely final showdown with activists early Tuesday.

Shipments of radioactive waste to Gorleben regularly attract protests, but this year they have been particularly strong, fired up by fury at Chancellor Angela Merkel’s aim to postpone when Germany abandons nuclear power.

And activists hailed the frequent stoppages as a success for their cause. “Practically everything got delayed … in the end, it was about sending a signal,” one female protester told news agency AFP.

“Not only is the shipment blocked, so are the government’s plans,” said Luise Neumann-Cosel, a spokeswoman for protest group X-Tausendmalquer. “We are sending out a signal to the government that we cannot be ignored.”

CLICK HERE FOR A PHOTO GALLERY OF THE PROTESTS

During the 67-hour journey from France, the activists did everything in their power to delay the train, including sit-ins on the line, removing stones supporting the tracks and abseiling from bridges into the train’s path. But the action came at a cost.

Protest group Castor Schottern said two demonstrators were seriously injured in clashes with police on Sunday. Twenty-nine had head cuts, three people had concussion and there were 16 broken fingers, it said.

The group said its supporters had suffered around 1,000 injuries in all, mainly to the eyes as police deployed pepper spray and tear gas.

Around 20,000 police were mobilised for this shipment, the 12th, the head of the police union DPolG, Rainer Wendt, said. The police operation has cost around €50 million ($70 million), authorities said.

The GdP, another police union, said that officers had used up their “final resources” dealing with the protests so far. As if police didn’t have enough to contend with, around 2,000 sheep and 50 goats wandered into one of the roads leading up to Gorleben, according to a spokeswoman for activist group Citizens’ Initiative Lüchow-Dannenberg.

“The animals just wanted to join in a bit,” she said.

Gorleben is a temporary storage site for radioactive waste, although a study is under way to see whether the former salt mine could hold the waste for the thousands of years that opponents say are needed for it to become safe.

Germany, in common with other European countries, has no permanent storage site. The EU Commission last week moved to press member states to solve the problem.

Merkel wants to extend the lifetime of Germany’s 17 reactors by up to 14 years beyond a scheduled shutdown of around 2020 as a “bridge” until renewable sources like solar and wind power produce more electricity.

Tens of thousands of people demonstrated in Berlin in September against the extension, and protesters have warned of more to come.

“The issue of a permanent storage site for highly radioactive waste has nothing to do with the question of extension,” Environment Minister Norbert Röttgen said late Sunday.

Sigmar Gabriel, head of the opposition Social Democrats, said the government had re-opened a “big conflict in society.”