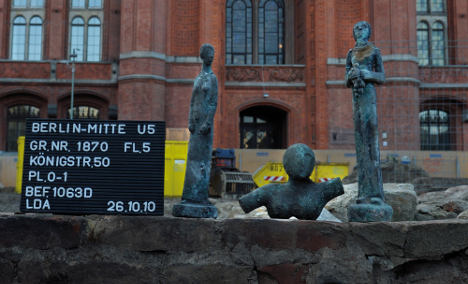 The bronze and ceramic sculptures are remarkably well-preserved, though the metal has taken on a heavy patina after spending more than six decades underground and suffering the heat of the fire that destroyed the building where they were stored, the Prussian Cultural Heritage Foundation said in a statement on Monday.

“This find is unique,” said state archaeology director and head of Berlin’s Museum of Prehistory and Early History Matthias Wemhoff. “Never before have artworks with this background been found during a dig.”

The Nazi party banned and confiscated what it called entartete Kunst, or “degenerate art” from both private collectors and museums, culminating the action in a Munich exhibition of the same name in 1937.

Click here for a gallery of the dig’s history.

Several of the classic modernist pieces found among the ruined foundations of a building were shown at this exhibition, the statement said.

Archaeologists at the dig just a short walk from the city’s famous Alexanderplatz square had been focussing on finding traces of mediaeval Berlin. It was during this phase that workers uncovered the first peculiar metal object in January 2010, which was only identified as an artwork after experts cleaned it at the early history museum.

A few weeks later historians determined that it was the likeness of actress Anni Mewes created by Edwin Scharff between 1917 and 1921.

Then in August archaeologists found more sculptures in the northwester corner of a cellar. Three more were found in October.

“The find of art defamed by the Nazis as degenerate points to the darkest chapter of German history, for which Berlin has and takes on a special responsibility,” the city’s Mayor Klaus Wowereit said in the statement. “Even as these artworks present themselves to us the history of the last 60 years has been burned into them. That is unique.”

Based on their location inside the buildings foundations, experts believe the sculptures were not actually stored there, but fell through from floor above when the building burned during the war.

They have determined that the works were taken from museums in Hamburg, Stuttgart, Breslau, Karlsruhe, Munich and beyond, then stored in the Reich Ministry of Public Enlightenment and Propaganda in central Berlin. But experts remain uncertain how the art came to building at Königstraße 50.

But among the building’s former residents lived one person who may have been involved, the statement said.

The late Erhard Oewerdieck (1893-1977), a tax advisor and escrow agent who rented an office on the fourth floor, is known to have helped Jewish citizens, for which he and his wife Charlotte were honoured by Yad Vashem after the war.

But his safe full of documents, which was also found among the sculptures, did not reveal any information on the artworks.

Research continues in hopes of learning more about how the works came to be in the building.

In the meantime, the bronze sculptures by Edwin Scharff, Otto Baum, Marg Moll, Gustav Heinrich Wolff, Naum Slutzky and Karl Knappe, along with remnants of ceramic sculptures by Freundlich and Emy Roeder, and three other unidentified works will go on display at the Neues Museum on Tuesday.

According to the Prussian Cultural Heritage Foundation, because the works were an archaeological find, they belong to the city of Berlin.

Archaeologists have been examining the layers beneath Berlin’s city centre near Alexanderplatz since October 2009 in tandem with construction for the long-awaited U5 metro line between there and the Brandenburg Gate.