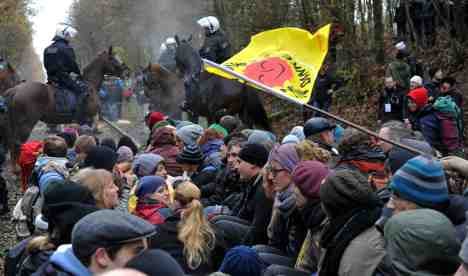 Police used batons and pepper spray to disperse around 250 anti-nuclear activists who were trying to sabotage the railway tracks, and the activists hurled firecrackers back, police spokesman Markus Scharf told AFP.

Witnesses said demonstrators also set fire to a bulldozer along the transport route.

A spokesman for activist group “Aktion Castor” said the police had responded with tear gas and a water cannon. The woods around the train tracks are “completely clouded with tear gas,” said Christoph Kleine.

Activists are trying to halt the train on its way to a storage facility in Gorleben, central Germany, which protesters say is unsuitable.

The 14-carriage train, dubbed by activists “the most radioactive ever,” is returning 123 tonnes of German nuclear waste for storage after it was treated in France.

The convoy is the 11th of its kind. A previous nuclear waste shipment sent over in 2008 was blocked for 14 hours by protesters amid a violent standoff with police.

Earlier Sunday, anti-nuclear activists abseiled over train tracks to block the controversial cargo. A pair of activists, backed by around 50 others, managed to hold up the train for around two-and-a-half hours early Sunday morning by abseiling from a bridge, police spokeswoman Cora Thiele said.

Meanwhile, police carrying out checks on three vehicles discovered equipment designed to allow people to chain themselves to the track, authorities in Dannenberg said. Sixteen people were taken into custody.

Despite the delays, police said the train was continuing on its journey towards its final destination, the storage facility of Gorleben.

On Saturday, tens of thousands of protesters gathered in Dannenberg to signal their opposition to the cargo. Organisers said 50,000 people had turned out, but police said the figure was closer to 20,000.

Police clashed with protesters who tried to remove the ballast from under the track near Dannenberg. Activists hurled stones and firecrackers at police, who responded with batons and pepper spray.

Around 16,000 police have been mobilised to deal with the protests in Germany.