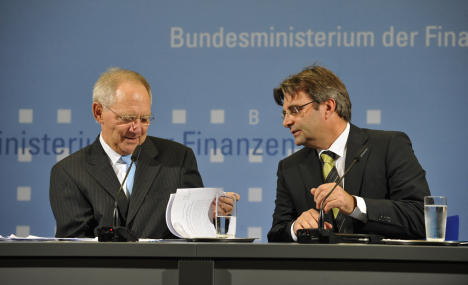 “In spite of any justified aggravation, I might have overreacted,” Schäuble told Germany’s Bild am Sonntag newspaper.

During a press conference last Thursday, Schäuble criticised his spokesman Michael Offer after learning that journalists gathered for the announcement of the government’s new tax numbers had yet to receive printed copies of the information.

With the cameras running, the finance minister told Offer that he had insisted 20 minutes before the press conference began that all media material should have been distributed.

When Offer responded, Schäuble countered, “Don’t talk – instead make sure the figures are handed out.”

Schäuble left the press conference shortly after the disagreement, only to return minutes later.

According to Bild am Sonntag, Schäuble was not familiar with the video of the incident, which the paper said had gotten nearly 190,000 clicks on its website as of Saturday evening.

The finance minister’s spokesman has reportedly received a flurry of supportive messages from citizens, as well as encouraging phone calls from fellow press aids.

Members of the opposition Social Democrats and the youth wing of the pro-business Free Democrats sharply criticised the CDU politician for his reaction, with Lasse Becker, chair of the Young Liberals, calling on Schäuble to apologise.

Becker told Welt am Sonntag he “hoped Mr. Schäuble was having a really bad day and now realises his mistake,” adding that the Finance Minister’s behaviour reinforced “the worst clichés associated with politicians.”

The SPD’s fiscal spokesman, Carsten Schneider, accused the finance minister of “bad form.” Schneider told Welt that the incident was a sign of “how frustrated (Schäuble) is, and that despite good numbers.”

The finance minister’s public demeanour was also a topic of conversation at the Free Democrats’ state party conference in Schleswig-Holstein, with the party’s state parliamentary group leader Wolfgang Kubicki joking that Schäuble was “on drugs.”

FDP head Guido Westerwelle rejected Kubicki’s comments, telling him the remarks were out of line.