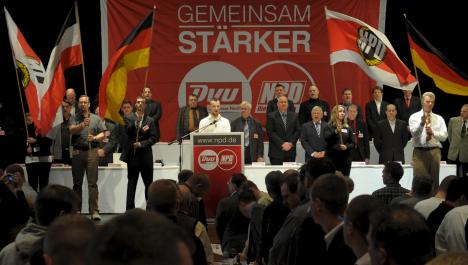 The action received the two-thirds majority necessary for passage, with 194 of the party’s 207 delegates voting in favour. DVU representatives are due to consider the merger at their party conference later this month. It would then be put to a vote among members of both parties.

The merger, which would be scheduled for the end of the year, would see the two parties emerge under a new name, “NPD – The People’s Union.”

Both the NPD and the DVU are facing dire problems with falling membership and financial struggles – and the parties hope a merger will improve their chances in state elections next year.

According to the domestic intelligence service, the Bundesamt für Verfassungsschutz, the NPD had about 6,800 members at the end of 2009 – a drop of about 400 over two years earlier. Meanwhile, the membership of the DVU is estimated at 4,000.

Several hundred people gathered in Hohenmölsen in the state of Saxony-Anhalt on Saturday to protest the NPD meeting, as well as demonstrate against right-wing extremism and xenophobia.

Just one day earlier, a Magdeburg administrative appeals court rejected a city motion challenging the NPD’s right to rent the community centre in Hohenmölsen. The ruling reinforced a previous decision by a court in Halle.

Pastor Thomas Wisch, who attended the protests, said the demonstrators wanted show that “people in a small town have the courage to talk back, too,” adding that most residents rejected the party and its ideology.

Saxony-Anhalt premier Wolfgang Böhmer, a member of Chancellor Angela Merkel’s conservatives, voiced his support for the protests against right-wing extremism, saying “the state government and every party represented in the state parliament” backed the demonstrators.

Böhmer also warned that the NPD did not signify a colourful and pluralistic democracy in Germany – saying the party represents the “brown, one-party dictatorship,” a reference to the colour associated with Nazi brownshirts.

In early 2005, the two parties formed a loose alliance called the Deutschlandpakt, but the NPD dissolved this about a year ago. The NPD ran in the state election in Brandenburg in September last year, helping drive the DVU to its worst-ever electoral drubbing.

Neither party ultimately cleared the 5-percent hurdle needed to win seats in the parliament.

The NPD has seen electoral success in some state parliaments and holds seats in Saxony and Mecklenburg-Western Pomerania, though it has lost ground in recent elections.

It was fined €2.5 million for funding irregularities last year, and there have been periodic calls to ban the party.