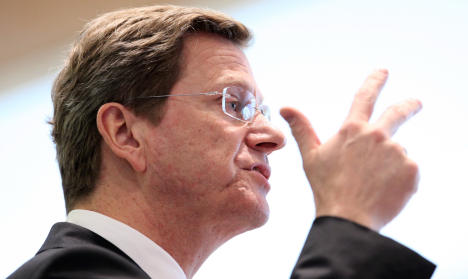 Westerwelle, who is also Germany’s vice chancellor, was to meet with Israeli and Palestinian officials in Jerusalem before travelling to Gaza Monday “if security concerns permit,” his spokesman Andreas Peschke said.

The Gaza stop has been cleared by the Israeli government. Germany is seen as Israel’s closest ally after the United States due to the strong bond they forged in the aftermath of the Holocaust.

But Berlin has been outspoken in its criticism of Israel in recent months, including its settlements policy and its deadly May 31 raid on a flotilla of aid ships.

“This is a quite critical phase and the minister will work toward a resumption of direct negotiations (between Israelis and Palestinians),” Peschke told reporters ahead of the trip.

While in Gaza, Westerwelle is to visit development projects and meet with business leaders. He will not meet with officials from the radical Islamist group Hamas, which runs Gaza.

In June, Israel blocked German Development Minister Dirk Niebel from entering the territory to meet with representatives of the United Nations Relief and Works Agency (UNRWA) for Palestine refugees.

Niebel blasted the decision as a “mistake.”

US President Barack Obama re-launched negotiations between Israel and the Palestinians in September.

But they ran aground just weeks later, with Abbas refusing to attend talks unless Israel renewed a moratorium on settlement building in the occupied West Bank.

European diplomats say they aim to make progress before campaigning for the US presidential election in November 2012 gets underway, distracting from any Washington-backed drive to foster the peace process.

It is Westerwelle’s second trip to Israel and the Palestinian territories since taking office one year ago.