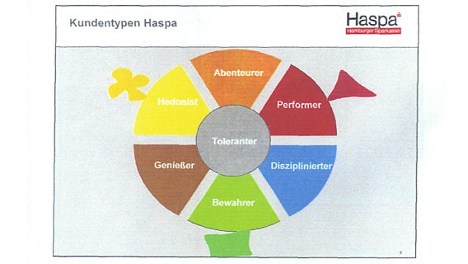 The internal documents show 1.4 million Hamburger Sparkasse customers divided into character types, such as a “conservationist,” a “hedonist,” and an “epicure” who “requires a more pleasant atmosphere” but “can be lightly pressured” by financial salespeople.

Others, such as the “adventurer” are “motivated by risk, conquest and struggle.” Sparkasse employees were then instructed that “arguments should be strongly emotional, to trigger their sense of impulsive decision making.”

“I saw the document, and I thought it was, frankly, disgusting,” she said.

“Hamburger Sparkasse are doing the opposite of helping their customers make responsible choices, by getting into their heads to manipulate them into make choices that are not really in their interest.”

One customer who spoke to NDR claimed that she had been labelled as a “hedonist” in her customer files despite only having spoken with a Haspa advisor twice in 33 years.

Shortly after the profiling was made public, the bank said it would discontinue the practice even though it has been it the best interest of its customers.

“Haspa used (it) in order to better understand the needs of customers,” the bank said in a statement.