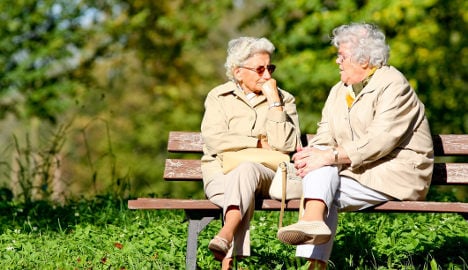 Germans’ life expectancy, compared with people of comparable nations, is reasonable though hardly stellar. Japan is the longest-living nation, according to figures compiled by Wikipedia, with men likely to live to 79 and women to 86.1.

Germany in 20th place, behind neighbours such as Switzerland, Spain, France, the Netherlands, Italy, Austria and the Scandinavia countries. It is roughly equal with Britain and well ahead of the United States, which is in 38th place with men expected to live to 75.6 and women to 80.8.

The latest figures show Germans born between 2007 and 2009 have the highest life expectancy registered since the office began compiling the data in 1871, when life expectancy was just 35 years and seven months for baby boys and 38 years, five months for girls.

For older people, life expectancy has also been adjusted. Men aged 60 can expect to live for a further 21 years and women for a further 24 years, 10 months. Their life expectancy is greater than children born today because the average excludes all the people of their generation who have died at a younger age.

Every second man in Germany can expect to live at least to 80 and every second woman to 85.

The latest figures are based on data about deaths and average population for the past three years. The report described the figures as “a snapshot of the mortality standards for the whole population in our time.”

They latest data are sure to fuel the national debate about Germany’s rapidly ageing society and whether people will need to continue working longer.

Some of the country’s political parties and trade unions are opposed to the planned raising of the retirement age to 67, but Germans will have difficulty keeping their current level of pensions benefits in place as the system is forced to support more elderly in coming decades.