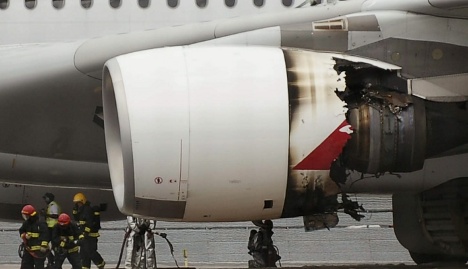 “Our planes are continuing to fly. We are running a normal operation,” company spokesman Thomas Jachnow told news agency AFP, adding that two of the three planes were currently in the air.

The Qantas double-decker plane carrying 433 passengers and 26 crew developed engine trouble just six minutes into a flight from Singapore to Sydney, and dumped fuel over Indonesia before returning to Singapore’s Changi Airport.

There were no injuries to passengers or crew, officials said.

Metal debris including a part bearing the airline’s red-and-white “flying kangaroo” emblem slammed into industrial and residential areas of the Indonesian city of Batam, opposite Singapore.