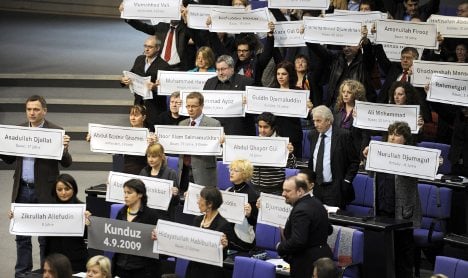 The daily Saarbrücker Zeitung reported that the tough new penalties were primarily aimed at the socialist Left party, whose MPs have recently held protests in the Bundestag with banners, masks and T-shirts, particularly against the war in Afghanistan and the Stuttgart 21 development.

Parliamentarians from the ruling Christian Democrats (CDU) and Free Democrats (FDP), with the backing of the opposition Social Democrats (SPD) and Greens, have struck an agreement to penalise breaches of order in the Bundestag with fines ranging from €500 to €3,000.

“We will introduce fines,” the parliamentary whip for the conservative CDU, Bernhard Kaster, told the paper. The introduction of the new penalties would be carried out “as soon as possible.”

The whip for the Left party, Dagmar Enkelmann, said only that his party was “yet to reach a position” on the fines.

The exact terms of the fines will be laid down in the next parliamentary session, the paper reported.