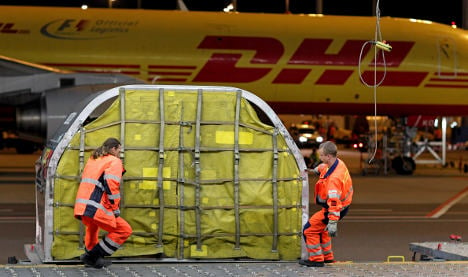 The package, thought to be sent by Greek leftist extremists, arrived in Berlin only days after Islamist radicals in Yemen tried to ship a letter bomb via Germany to the United States.

“This incident, and also the problem with a suspicious package that we just had at the Chancellery, must lead to a closer coordination of security checks on cargo goods within Europe, with the United States and potentially worldwide,” Merkel told the daily Passauer Neue Presse.

Routine checks at the Chancellery mailroom discovered a briefcase-sized package filled with an explosive substance on Tuesday afternoon. Federal police were able to disarm the parcel and no-one was hurt.

The package has been linked to a wave of attacks across Europe by leftist extremists in Greece.

German Interior Minister Thomas de Maizière told reporters on Tuesday night that the package had been posted from Greece two days ago and that the explosive device was built in the same way as the bomb that exploded at the Swiss embassy in Athens earlier the same day.

They were similar to four devices sent to embassies in the Greek capital and intercepted Monday, including one addressed to French President Nicolas Sarkozy and Italian Prime Minister Silvio Berlusconi.

“We are in very close contact with the Greek authorities. But there was no advance warning from Greece,” de Maizière said, adding that the device “could have caused significant damage.”

De Maizière said security at all government mail rooms had been bolstered and ordered them to exercise particular caution with packages from Greece. Authorities in Athens announced on Wednesday they were halting all shipments abroad for the next 48 hours.

Earlier this week, Germany extended a ban on air freight from Yemen to passenger planes after an alleged al-Qaida plot attempted to send two parcels to Jewish institutions in Chicago containing the lethal explosive PETN hidden in ink toner cartridges. One of the packages had been routed via Cologne before being discovered in Britain.

In light of such diverse threats, Merkel on Wednesday said Germany could not tighten security on global freight alone.

“Terrorism can only be combated effectively when we coordinate our efforts worldwide,” she said. “I don’t want to sugar-coat anything – the threat exists. Everyone must remain vigilant.”