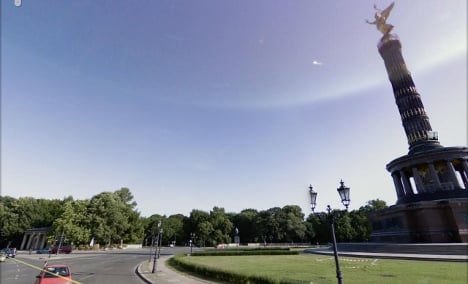 The company put the images online overnight to tantalise users ahead of its plans to launch the full navigation service for Germany’s 20 largest cities by the end of 2010.

Users can go to a page entitled “Street View Gallery” to circle Berlin’s famous Victory Column and pass by the Chancellery, or see sights in Dresden, Munich, Hamburg and Stuttgart on a virtual sightseeing tour entitled kleine Deutschlandreise, or “little German trip.”

An example of the full service can also be viewed along one street of the small mountain community Oberstaufen in the southern Allgäu region – here users can also see a home that has been blurred out by Google in compliance with their opt-out programme for residents concerned about privacy.

With about 7,000 residents, Oberstaufen is not among Germany’s 20 largest cities, but their tourism society reportedly requested that Google place images of their community online as soon as possible.

The milky filter placed over the homes will not be unusual once the full Street View service launches. More than 244,000 German residents and owners of businesses and residential buildings chose to opt-out of being pictured online.

According to Google’s assessment last month, the number of people who opted-out of the programme did not correspond with the widespread controversy over the online navigation service.

Some national surveys reportedly predicted that the number of people taking advantage of the opt-out programme could reach up to 50 percent of German households.

Renters and owners who don’t want their buildings posted on the internet for the world to see were allowed to use normal post or an online form to register their objections until October 15. Those living outside the 20 cities launching the German version of the service can still register an objection after the deadline.