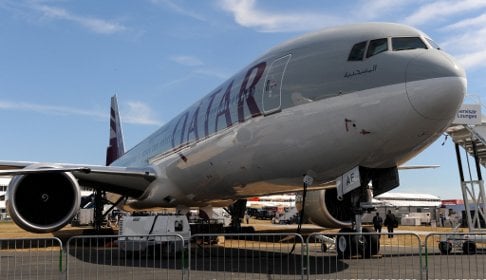 The spokesman told a regular government briefing that Germany had stepped up its emergency measures when it emerged that one of the parcel bombs had been routed via the western German city of Cologne. Germany is the first country to announce a ban on all flights from Yemen.

“All Yemeni air companies that fly to Germany have received a flight ban,” the ministry spokesman said.

“The German air authorities have orders to turn back all direct and indirect flights from Yemen. That means that for the time being, there will be no flights to or over German territory allowed.”

The German government said Saturday that it would outlaw all cargo from Yemen indefinitely. A spokesman said Monday that Berlin was now weighing whether to ban freight from other countries amid a major security review.

The Transport Ministry spokesman said Germany had no current figures on the amount of cargo from Yemen. A source close to the government said there was only one flight to Germany on a Yemeni airline per week, via Rome.

Government spokesman Steffen Seibert told the same news conference that Germany would work with its European partners and US authorities to coordinate further steps to protect air traffic.

“(Cargo traffic) is harder to control than passenger traffic because it can lead to a world trade being slowed down,” Seibert noted.

Qatar Airways said a package containing explosives was flown from the Yemeni capital Sanaa to Doha and then on to Dubai Friday on one of its aircraft. A source said on condition of anonymity that the plane was a passenger flight.

The bomb had PETN hidden inside a computer printer with a circuit board and mobile phone SIM card attached, officials said.

The other parcel was found at East Midlands airport in central England and travelled through Cologne. British Prime Minister David Cameron said it appeared designed to blow up a plane.

If they had gone off, “they would have caused significant damage,” he said, without specifying the source of the information.

US officials have said the two intercepted packages originating from Yemen were addressed to synagogues in Chicago, President Barack Obama’s former power base. They have cited Ibrahim Hassan al-Asiri, an alleged Al-Qaida bomb-maker born in Saudi Arabia but based in Yemen, as a “leading suspect” in the case.

Evidence suggests the same person built the intercepted parcel bombs and the device worn by the “underwear” bomber Umar Farouk Abdulmutallab who botched an attack on a passenger flight to Detroit on Christmas Day 2009.