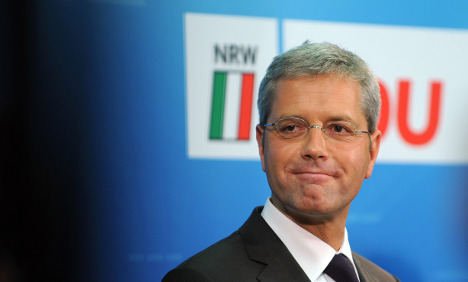 The 45-year-old from Meckenheim garnered 54.8 percent of the vote by state CDU members against his opponent, former NRW integration minister Armin Laschet, who took 45.2 percent.

In his first statement following the results, Röttgen said the CDU in Germany’s most populous sate would proceed with confidence.

“We will now make this clear to the opposition,” he said, adding that he was ready to run as the party’s top candidate for NRW state premier in the next election.

After suffering a stunning defeat at the last state election in May, the beleaguered conservatives have pinned their hopes on the young Röttgen to take on centre-left Social Democratic state premier Hannelore Kraft and her minority coalition with the environmentalist Greens.

As leader of the party in the state, the politician now has good chances of being made a deputy to CDU party leader Chancellor Angela Merkel during the national convention in two weeks.

The party’s choice of Röttgen, who has said he is open to working with the Greens, is viewed as a decision for the party’s future direction, and the North Rhine-Westphalia Greens congratulated him.

“We are anxious to see if he drives a course of renewal for the CDU in the state and can pull the party out of the failed era of [former CDU state premier Jürgen] Rüttgers,” party co-leaders Monika Düker and Sven Lehmann said in a statement.