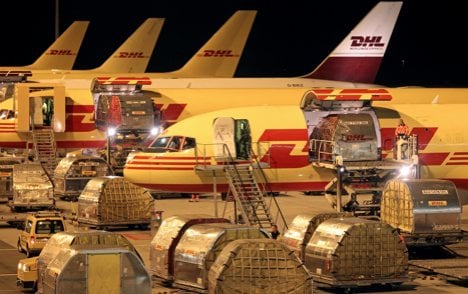 “The federal government guarantees that from now on, no freight coming from Yemen will arrive in Germany,” the minister said.

“The German aviation management has ordered all air companies, express carriers and other groups to check 100 percent and, until a new order is issued, stop existing and stored freight from Yemen,” he added in a statement.

The checks were meant in particular for freight that was in transit and was to continue its journey by road or railway, the statement said.

The ministry announced earlier that major air freight carrier DHL had tightened checks at its German hub in Leipzig on goods coming from Yemen at the request of the US authorities.

London police headquarters Scotland Yard said Saturday that a suspect package found on a US-bound plane in Britain was routed via the German city of Cologne.

They were however unable to stop it from leaving Cologne airport. Two packages containing explosives and addressed to synagogues in Chicago were intercepted on cargo aircraft in Dubai and Britain, triggering a massive international security alert Saturday.

Yemeni security forces have arrested a woman over the bombs in a suspected Al-Qaeda plot that Britain said was aimed at blowing up at least one of the planes.

France’s civil aviation authority announced Saturday it had suspended air freight from Yemen in the wake of the interception of the two parcel bombs.

Belgium called for “greater vigilance” of flights between Yemen and the United States.