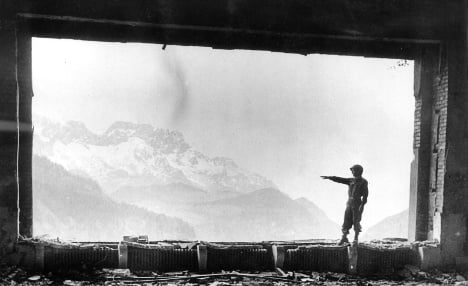 The British Foreign Office documents showed on Thursday that the Allies believed stocks which were being built up as part of the “national redoubt” would have allowed 60,000 men to hold out for two years in the mountains around Salzburg.

The Allies assumed Hitler and “the elite of Nazi Germany” would then be able to direct a campaign of pro-Nazi propaganda and sabotage with the aid of European sympathisers.

“Preparations for the redoubt have been a principal point of enemy preoccupation since the Allied crossing of the Rhine,” a Foreign Office report dated April 27, 1945, said.

“In this area Allied air superiority will play little or no part since the opportunities for underground supply depots, offices and quarters are practically unlimited.

“There are a significant number of reports concerning the movement of large quantities of supplies. They have an obvious significance which is not to be escaped.”

Despite scepticism from the press and public, the information helped convince Allied commander in chief, US general Dwight Eisenhower, to broaden his attack to southern Germany, leaving the way open for Russia to take Berlin.

But although the Nazis had made limited plans for a base in the area it transpired that the project had been massively exaggerated by Nazi propaganda chief Joseph Goebbels, and had never been endorsed by Hitler.

The success of Goebbels’ deception is evident in the detail of the Allies’ plans.

“The enemy’s weak point will be transport,” the report continued. “There is no possibility of replenishing stocks since most essential raw materials are lacking. He must inevitably be starved out if not earlier defeated.”

The Allies’ information, drawn from Belgian and Swiss intelligence, the French resistance and local citizens, led them to think the caves would be used to make “secret anti-tank and anti-aircraft weapons.”

The bunkers were also expected to serve as offices for the large numbers of party elite who had been seen moving south. In preparation, foreign intelligence said the Nazis had moved 1,500 tonnes of wheat, 1,800 tonnes of dried and tinned vegetables and 1,000 tonnes of fat, preserves and oil to the redoubt areas of Austria and Bavaria in March 1945.

A message from Swiss intelligence warned: “Trains, some unusually long, loaded with sundry war material have been arriving three to five times weekly in Vienna. Fear spreading in Austria.”

The British government was advised that the battle would be fought against “those with nothing to lose,” “Nazi fanatics”, and “over-optimists.” who were hoping ideological differences would eventually tear apart the Allied coalition.

The Allies were informed that Heinrich Himmler, described as the “soul” of the movement and its “first chief,” had “developed a system of double identity for all his helpers, using the identity papers of soldiers who died in battle.”

According to the information, Himmler expected a brief period of resistance before official hostilities ceased and the guerrilla campaign began.

Among the significant documents are more mundane testaments, including those of a 19-year-old Austrian defector who had worked at Hitler’s headquarters.

“Hitler was grey and bent, but wore a very satisfied expression,” he said. “His face was pale and covered with loosely hanging flesh.”

The informant said Hitler would rise about 10:00 am, have a breakfast of coffee, bread and marmalade before going on his morning walk.

The ex-soldier described the Nazi leader as “mild on personal contact” but “apt to bang tables and shout.”