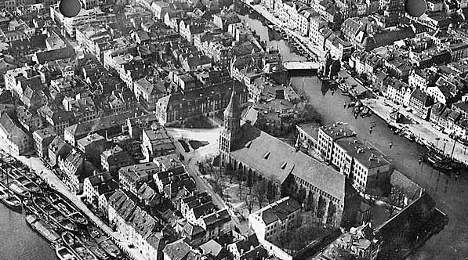 Arthur Sarnitz, born in Kaliningrad to Estonian parents, wants to rebuild its urban core to resemble how it was prior to World War II, before Allied bombing and the Red Army destroyed much of the then German city.

“My plans are ready,” Sarnitz told daily Die Welt this week. “It would be the biggest project of its kind in the world.”

Following Nazi Germany’s defeat in 1945, Königsberg and the surrounding East Prussian territory was handed over to the Soviet Union. The German residents were mostly expelled and Soviets renamed the region wedged between Poland and Lithuania Kaliningrad.

Die Welt reported Sarnitz envisioned first excavating the foundations of Königsberg currently buried beneath modern buildings. His first target for demolition and reconstruction would be the 7.5 hectare central district of Kneiphof including the local town hall.

“If we uncover the top layer, we see the walls of old Königsberg,” he told the paper. “That’s what we want to dig up and we’re being helped by Polish, Russian and German archaeologists.”

Though the buildings would appear outwardly historic, Sarnitz wants to outfit them with modern interiors adapted to 21st century life.

Sarnitz even hired a computer-game company to create a simulation of the reconstructed old town, where Königsberg’s most famous resident – the philosopher Immanuel Kant – strolls through the winding pixelated streets.

The ambitious architect is banking on support from the Kremlin, and Russian Prime Minister Vladimir Putin, whose wife comes from Kaliningrad, has reportedly backed rebuilding the town’s historic castle.

However, while Sarnitz admitted financing the project will be difficult at best. “There is no money whatsoever,” he said, explaining he had pegged his hopes on Russian corporate sponsorship.

“A good cause will always find money,” he told the paper. “And the reconstruction of historic Königsberg is historically and morally a good thing.”