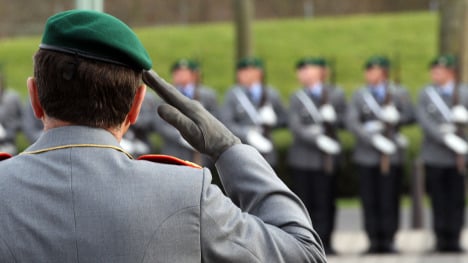 The recommendations, released by Defence Minister Karl-Theodor zu Guttenberg on Tuesday, confirmed what was already widely thought – that Germany’s military, as well as the ministerial defence apparatus, is inefficient and desperately needs modernising.

Civilian administration should be slashed by more than half to fewer than 1,500 officials, the expert panel said. The report will provide useful ammunition to Guttenberg, who is eager to reform the forces.

The expert panel backed Guttenberg’s plan to cut the number of troops from 250,000 to 180,000, and his push to suspend conscription. Universal military service was “no longer necessary for the foreseeable future,” it concluded.

Unveiling the report in Berlin, Guttenberg announced it would form the basis for reforms. His ministry would put forward some recommendations by the end of January.

“Cosmetic measures will not be enough,” he said. The Bundeswehr was “no longer up to date.”

“Therefore a new direction is essential,” he said.

But Guttenberg also made clear that the recommendations would not be implemented word for word. He said he wanted the new direction for the forces to be set in concrete within two years but added the reforms would probably take five to eight years to carry out.

Guttenberg also batted away questions about his push to move part of the ministry from Bonn to Berlin.

The commission recommended that the bureaucracy be slashed by more than half – to fewer than 1,500 officers – and consolidated in Berlin.

According to weekly Die Zeit, the panel declared that within the ministry, there was an “overall diffusion of responsibility” that meant a clear direction was “impossible.”

Ministry staff “hindered one another in structures that were not capable of success.”

Guttenberg set up the commission back in April to recommend the best way to overhaul Germany’s creaking armed forces. The experts were led by the head of the Federal Labour Office, Frank-Jürgen Weise.