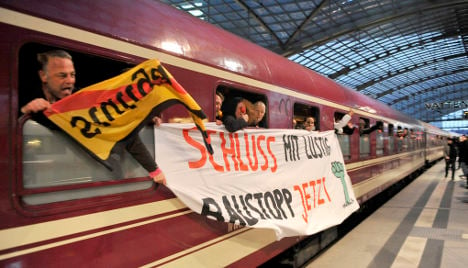 About 600 activists caught a specially chartered train to the capital for a full day of protest. Demonstrators told The Local that all Germans, not just those in the Baden-Württemberg capital Stuttgart, should be worried about the €4.1 billion development.

They lodged a petition with the Swiss Embassy for the state of Baden-Württemberg to be admitted to the Swiss Confederation and planted a chestnut tree near the German Chancellery as a symbol “against police violence and propaganda.”

The activists chartered their own train rather than take Deutsche Bahn, the national rail operator behind the Stuttgart 21 project.

Click here for photos of the protestors in Berlin.

With support for the protest spreading around the country, especially in the wake of the violent scenes in which police turned water cannon and pepper spray on the crowds, demonstrators were hoping to cement Stuttgart 21 as a national issue.

“We are all citizens, whether in Stuttgart or here in Berlin,” protestor Otto Pfeiffer, 56, told The Local. “We wanted to show that this is a problem for all of Germany and not just in one place.”

A common message among the demonstrators was that the people who came in force from Stuttgart to Berlin were not a rabble but rather ordinary people who knew the facts of the issue and felt strongly about it.

“This is the first time I’ve ever been to a protest,” said Geirde Glaser, 34.

Another protestor, Christina Wofur, 34, said: “We have a mix of people here today because they are all decent people who have informed themselves and decided to engage with the problem … We’re hoping to cement some support today.”

Jule Keinarkh, 26, said the fact that part of the funding came from the federal government made it a truly national issue.

“We wanted to protest at every level to show our dissent. With all the money going on this project it means that there won’t be any for the kinds of social projects that the people really want,” she said. “We’re a good mix here: old, young, students, bakers – everyone. The point is that these are all people who have gone and got their facts, and informed themselves and decided to take part.”

Ursula Kleiner, 41, said she now had to use a special Cortisone lung spray because she suffered the effects of tear gas during the demonstration that turned violent.

“The thing is that many citizens can identify with this problem,” she said. “We are the little guy standing up to the big, well-funded corporations and we want people internationally to see how we’re pushing against this.

“The plans for the station are against German democracy, and that is something that everyone can relate to.”

The massive project, which aims to make Stuttgart part of a 1,500-kilometre high-speed rail route across Europe, and requires a dramatic re-landscaping of the city centre, has sparked huge protests in the southwestern city.

In one violent incident, police turned water cannon and pepper spray on a crowd that was blockading the Schlossgarten park, where 300 trees were due to be chopped down.

Stuttgart 21 will require 16 new tunnels, 18 new bridges, 60 kilometres of new train track and three new stations. Stuttgart’s terminus will be transformed into an underground through-station. The cost of Stuttgart 21 project is estimated at €4.1 billion but related rail overhauls are expected to cost a further €3 billion.