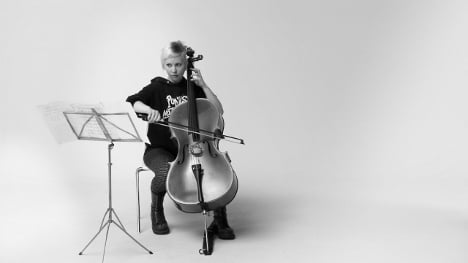 How do you make a film about street kids without ever showing the street? For Maria Speth, the solution was simple: talking about homelessness and its harsh realities was more effective than resorting to exploitative images.

Not wanting to prod vulnerable states of hurt and neglect, Speth invited her subjects into a studio to share their stories completely separate from their backgrounds.

Her film, “9 Leben” (9 Lives) toggles between the lives of a number of youths, from mid-teens to early twenties, that left their broken families to beg on the streets of Berlin. The documentary, which just won a €4,000 prize at Leipzig’s DOK film festival, is filmed entirely in black and white, with each interview shot against a blank background.

Through intimate close-ups of faces full of metal piercings, full-body portrait shots, and the sorrowful lament of a cello played by a 16-year-old street punk named Za, “9 Leben” offers a clean slate for their emotions. Speth gives no context of her subjects’ lives, only perspectives.

There are no cut-aways to the streets, to the desolation. Only words and expressions, as we slowly learn their names, their pasts and how they survive.

The majority of the street kids come from families plagued by violence and substance abuse. Almost all of them express a feeling of disassociation from their family, where neglect and estrangement replaces love and security. Some even confess hatred towards their mothers, which is quickly followed by tears and a trembling wince.

“The street isn’t exactly the nicest place, but its better than home,” says Soya, a young girl who takes photographs of the dogs at her youth centre. Recounting how she completed the Way of St. James pilgrimage walk in northern Spain, Soya says she left stones from her home to symbolize a break from her past.

Jessica, the young daughter of an alcoholic, thinks of her mother as nothing more than a “birth machine” who chose to have her in order to receive more welfare money for booze.

Another youth hit the streets and found friends among jazz musicians after witnessing his father’s suicide and his mother’s neglect. He thinks about suicide often, he confesses, and has even tried it to kill himself.

Sunny, as 23-year-old heroin user, says she has built a wall around herself, but is well aware that “sitting behind it is a little girl who is crying.”

None of Speth’s subject were physically driven from their homes; they all chose to leave on their own and “settle” in places like Berlin’s Alexanderplatz square and Zoo train station.

“Berlin is attractive to people who leave their parents and their home. A lot of them decide not to stay in Frankfurt or Hamburg and they go to Berlin instead because it’s known for this phenomenon,” says Speth.

It’s also known for its support system, such as social institutions and youth centres that provide street kids with shelter and health care. Two years ago, while researching homelessness for a feature film screenplay, Speth spent a year building contacts with certain kids who worked the streets and frequented such centres. Making a documentary was not her original plan, but Speth was inspired by the honesty of their stories, along with their fragility.

“Begging is a job. It has its own daily routine just like life at home,” says one former street kid-turned-mother. “The street is not free because you have to depend on what other people have.”

If nothing else, Speth has provided her subjects with freedom – a safe place to peel back a layer of grit and expose their sensitivity by recounting one painful experience at a time.

‘9 Leben’ will show at Austria’s Viennale at the end of the month.