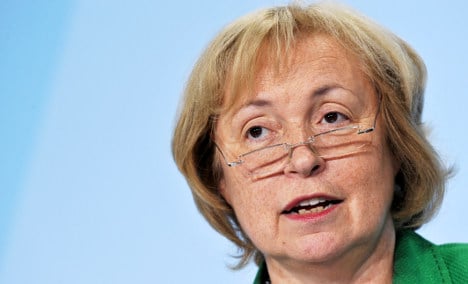 Such a move would bring the federal government into line with many states who have already set up such central authorities, Böhmer on Monday.

“I believe it would be logical to have an integration ministry,” the conservative Christian Democrat told daily Hamburger Abendblatt. “The broad issue of immigration should be addressed in one department.”

Several of Germany’s federal states, including North Rhine-Westphalia and Lower Saxony, have already taken this step and created a national conference of state integration ministers, she said.

“And communities are also strengthening the topic of integration politically,” she added.

Böhmer’s comments came in the midst of a bitter debate over immigration and integration in the country. In recent weeks several of her fellow conservatives, including Chancellor Angela Merkel, have made controversial remarks about how multiculturalism has failed in Germany.

As the discussion becomes increasingly heated, Böhmer told the paper that integration and immigration have become the issues of the future.

She also advocated improved recognition of attempts by immigrants to integrate and an increase in the number of naturalisations in Germany, saying that people who choose to live permanently in Germany should be willing and able to become citizens.

“We must persist in campaigning for German citizenship,” she told the paper.

According to the integration commissioner, rules already exist that speed up the process of naturalisation for immigrants who prove to be well-integrated – but officials often choose not to comply, she said.

“I am appealing to the immigration offices to use this rule,” she said. “The state must better recognise attempts at integration.”