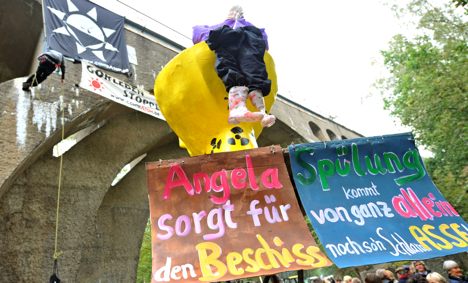 More than 60 protests are planned in the state of Lower Saxony, where the Gorleben depot is situated, in a mass effort to put political pressure on the government over its plan to carry out another waste shipment in two weeks’ time.

Protests also began in Cologne, Düren, and the scientific research centre in Jülich, where the waste is currently located. The protest organizers are expecting up to 20,000 people to take part in the demonstrations, which will include attempts to sabotage the railway tracks along the so-called Castor transport’s intended path.

Castor stands for “cask for storage and transport of radioactive material,” and the trains used to move the containers are regularly accompanied by demonstrations throughout Germany.

Jochen Stay, spokesman for the anti-nuclear protest group ‘Ausgestrahlt’ said: “Angela Merkel needs to abandon her radical nuclear power plans, because we don’t accept that we all have to carry a greater risk so that the profits of four energy corporations can continue to flow.”

The radioactive waste is to be transported to an above-ground building in Gorleben, which Stay believes makes clear how the problem of disposing of nuclear waste remains unsolved. Stay said the waste is being kept in containers designed to last forty years, while it remains radioactive for millenniums.

He added that no safe site has yet been found for the waste anywhere in the world, but the government remains determined to add to it by extending the operating life-spans of Germany’s nuclear power stations.