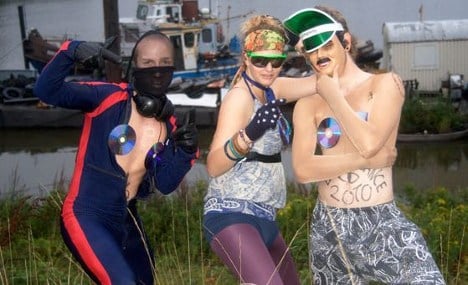 On Saturday, ten dance teams will participate in the second annual Ugly Dance World Cup, gyrating awkwardly to terrible music in hopes of proving that they are the most tasteless, maladroit dancers in the land.

In an effort to appear as unlikeable as possible, groups from around the country with names such as “Team Remmidemmi” and “Inferno Ragazzi” will don garishly ironic costumes that include 80s fluorescent accessories, CD pasties and snowboarding boots.

The four 32-year-old Hamburgers who established the event can’t refrain from silliness even when explaining their inspiration for the event, daily Süddeutsche Zeitung reported on Friday.

“Because of climate change an evil monkey recommended that we organise a World Cup for ugly dancing,” organiser Florian Schüppel told the paper. “We’re the executive power behind a new movement. The time was ripe.”

Their goal, the group says on its website, is to celebrate “ugly aesthetics.”

The ten teams were chosen based on dance video submissions highlighting their overwrought attempts at proving their ungainly graces – often to hilarious effect.

The event’s jury comprises the incumbent contest winners, a guest from the public, and an Ugly Dancing applicant who failed to make the final cut.

In the contest’s finale, the winning dancers are chosen by the public. Whoever gets the most boos, wins.