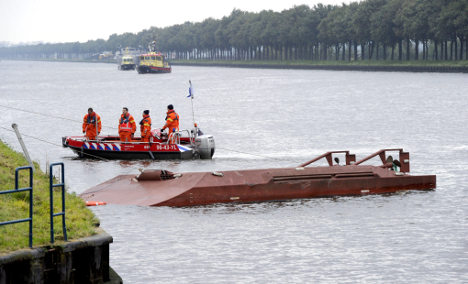 Dutch divers and helicopters with infrared cameras have been searching for passengers and the ferry’s skipper without success, police said. It remained floating upside down as rescuers conducted their search.

Initial reports said that the ferry was carrying both cyclists and pedestrians, but Dutch police said later that they could not rule out the possibility that only the skipper had been on board.

“But the search for victims goes on until we’re certain, of course,“ police spokeswoman Carine Portengen said.

So far only the ferry skipper has been reported missing, she said.

By afternoon the man had still not been found, and ferry operator Swets ODV said they feared for his life, but that a much larger catastrophe had been avoided.

“Usually the ferry is full of school children at this time, but we’ve been lucky that they’re on autumn break,” a spokesperson from the company said.

Eyewitnesses reported seeing the small pontoon ferry overturn after the collision with the cargo ship around 7 am on the Amsterdam-Rhine Canal between Breukelen and Nieuwer Ter Aa, about 30 kilometres south of Amsterdam. The canal connects the city to the Rhine River, used mainly for shipping.

The captain of the German freighter, which came from Duisburg, is being questioned by Dutch police, who have called on witnesses to step forward. Authorities later said the captain had passed an alcohol test.

The 72-kilometre long canal was closed off for several hours to ease rescue efforts.