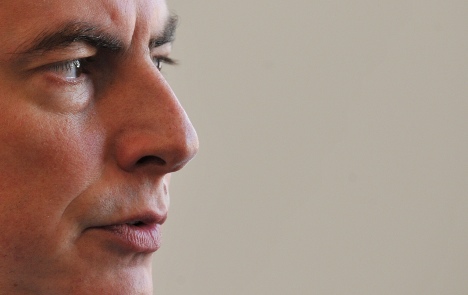 The 39-year-old Christian Democrat widely known as “Mac” was born to a Scottish father serving with the British Army in West Berlin and a German mother.

Despite the incessant questions about bagpipes and kilts, he has risen through German politics to lead the nation’s fourth-most populous state.

In the wake of the British Government’s announcement this week that it would pull half of its 22,000 troops out of Germany in the next five years and the rest by 2020, McAllister spoke to The Local about the impact on his state as well as his personal regret.

You’ve obviously followed this issue closely for some time. How do you feel about the outcome?

First of all, we’ve got to respect the decision of the British Government. Until now, we were sure the British troops would stay at least until 2035 in Germany … so of course that’s disappointing news for us because the British forces in Germany and especially Lower Saxony are welcome guests and friends who are very well integrated and have an important role for the local economies.

Were you surprised by the short time-frame for the withdrawal?

We all knew that October 20 was going to be a very important day when the British Prime Minister (David Cameron) was going to announce his strategic defence review and we knew that the presence of British forces in Germany would be an issue, so it wasn’t such a big surprise.

The surprise for us was that it is quite a tight schedule. It’s not a lot of time. In Bergen in Lower Saxony, for instance, new houses are just being built for the troops.

Cameron promised to consult with the relevant German state governments, yourself included. Are you happy with that consultation?

The British liaison officer gave us early information and I had an hour-long talk with the former British ambassador, Michael Arthur, who’s just left Berlin. So … of course we’re disappointed and of course this will hit the communities hard, but I still say we’ve got to respect the decision of the British government and thank the British government and British forces for all the time they’ve spent in Germany. They have certainly made a large contribution to peace and security in Europe and in Germany.

What kind of impact will it have on smaller communities around these bases. What are their prospects now?

You can read in the newspapers today how worried the mayors are. That’s understandable. For instance in Lower Saxony the town of Bergen will be hit extremely hard. You can hardly imagine it without British troops because there is a huge barracks from which personnel and their families went shopping, bought their cars, went to the restaurants.

Life will go on but especially for Bergen and Fallingbostel it will be very, very hard and of course these cities will need some kind of assistance. That’s something for which the federal government and state government will have to come up with a plan.

What do you intend to do as premier of Lower Saxony to start preparing those communities for the transition?

We are now in close contact with British liaison officers and also with the German ambassador to London as well as the new British ambassador in Berlin, Simon McDonald. I’ll probably try to meet him in the next few weeks.

The other thing is that the German government is working on a strategic defence review, quite similar to the British government’s. (Germany) will also be talking in the coming months about closing down barracks and garrisons and we’ll have full details about that in the summer of next year.

I do think that decisions the German Ministry of Defence takes need to take into account the decisions of the British Government. If the Bundeswehr planned also to withdraw troops or to close down barracks in the same areas, they would be hit even harder. I think you’ve got to consider what Lower Saxony and North Rhine-Westphalia will be facing in the next 10 years with the British forces leaving.

Are you making that argument to the federal government now?

I already made the argument to (Defence Minister) Karl-Theodor zu Guttenberg two weeks ago.

At the risk of getting metaphysical, you wouldn’t be here if not for the post-War presence of British troops, so on a personal level how does it make you feel?

Of course, because of my personal background I’m quite emotional about this issue. We all knew it would happen one day. It’s understandable when you look at the British budget how important the reorganisation of forces are from a strategic point of view but still it will be a sad moment when the last British troops leave.

Do you feel they’ve reshaped in a positive way relations between the two countries since World War II?

Absolutely. The presence of the British Army in the last 50 years in Germany had a major impact on close Anglo-German relations. Lots of friendships and mixed-marriages and the products of mixed marriages were created – and one of them is now premier of Lower Saxony.