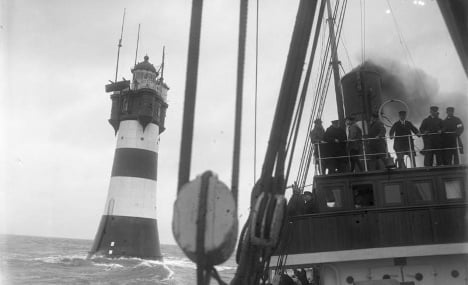 A ship approaches the lighthouse in 1931. Photo: German national archives

Finished in 1885, for almost 80 years the red, white and black lighthouse was the first thing sailors saw on their way into the port city, and the last thing millions of emigrants saw before their ships reached the North Sea on their journey to the New World.

At the time of its construction some 30 miles from the Bremerhaven port, it was the first-ever manmade structure built on the sea floor – a technical marvel at a depth of 22 metres. But by 1964 its steel foundations were unstable and the lighthouse was decommissioned.

Click here for more photos of the Roter Sand.

“The tower fell into disrepair,” says Christine Feulner of the German Foundation for Monument Protection (DSD), who manages what has become one of the most famous maritime symbols of Germany’s North Sea coast.

But in 1987, a spectacular rescue action restored the 31-metre tall building’s foundation, and following a restoration of the interior, the DSD worked to open the protected lighthouse to the public. Since the first visitors scaled the stairs of the Roter Sand in 1999, the lighthouse has welcomed some 5,500 day trippers and 800 overnight guests.

There is no electricity or heating, but guests are afforded the luxury of a step-bridge between the structure and a tugboat to enter, which is likely more secure than the large basket once used to haul the lighthouse keeper up to his lookout.

With room for up to six overnight guests, the tower comprises one communal bedroom, a combined kitchen and living area, and a bathroom. Guests must supply their own sleeping bags and towels but will arrive to find a fully-stocked kitchen, although they must do their own cooking.

There is also a ban on alcohol in the lighthouse.

“Between the living room and the toilet there are around 70 well-worn steps, where you have to be careful whether you’ve had a drink or not,” says guest Harald Kirbach, who spent the night there with friends.

Despite the rustic conditions, the Roter Sand, which celebrates its 125th birthday on November 1, is already almost fully booked for next season.

Kirbach describes the atmosphere around the lighthouse, which he saw after the three-hour tugboat ride from Bremerhaven, as “highly emotional,” a place where guests can sit on the outer balustrade of the tower and take in the sounds of the North Sea as they watch the passing ships.

“The crews waved to me and waved back,” the 58-year-old said. “It was simply great.”

In honour of the lighthouse’s birthday, it will undergo a further €150,000 of renovations next year, the tourism board reports.

But those hoping to visit the Roter Sand will have to be patient. The tugboat “Goliath” can only make the trip to the lighthouse on calm seas, which means that bookings – available only June through September – can be cancelled at the last minute.

Lucky guests could get an extra night in the tower due to bad weather too, though.

“The guests stay in the lighthouse until the weather situation allows for pickup,” says Tanja Albert from the Bremerhaven tourism office.

Day trips to the Roter Sand run around €75. Two days with one overnight stay are a little pricier at €488 per person, and three days with two nights costs €573 per person. All bookings are made through the Bremerhaven tourism board.