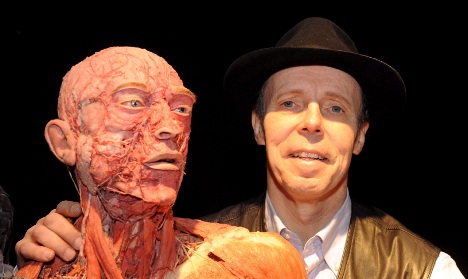 The provocative 65-year-old, known as “Dr. Death” in Germany, recently sent a letter to his body donors, customers and other business partners announcing that www.plastination-products.com would open on November 3, daily Süddeutsche Zeitung reported this week.

Von Hagens is infamous for inventing a process for transforming the bodies of people and animals into plasticised pieces for his Body Worlds shows – and now such items will be available for purchase online, but only to scientists and medical experts.

This May, von Hagens, who dresses a bit like an 19th century undertaker, reopened his Brandenburg plastination plant, the “Plastinarium,” after extensive renovations in Guben. He now has some 200 workers creating new plastinations of humans and animals.

But Catholic bishops in Germany reacted to the announcement of the new online shop with indignation.

Click here for a gallery of the controversial Berlin exhibition where corpses were displayed in sexual positions.

In a group statement, Archbishop Robert Zollitsch and others called on politicians to stop von Hagens from committing what they called “breaking a taboo.”

Many critics have accused von Hagens of exploiting human beings, though all of his subjects have donated their bodies to the plastinator.

“This is not about new discoveries for science and research, but about picking at bones and spectacle under the guise of medical enlightenment,” Zollitsch said in the statement, adding that the sale of body parts was disrespectful to the dead.