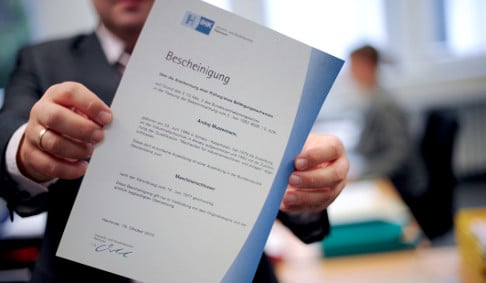 Among the newly sought-after immigrants is Uzbek doctor Zinaida Fomenko, an experienced gynaecologist who until recently worked as a cleaner in Germany, a period of her life she describes as “difficult.”

Under a pilot programme in Brandenburg, the vast rural state surrounding Berlin, Fomenko has been able to throw her broom and mop aside and resume her chosen profession, which she practised for 19 years in Tashkent.

“It has not been easy returning to medicine after eight years,” the 53-year-old told news agency AFP. “It was hard — I broke my back to do well in this programme.”

The scheme, still unique in Germany, involved 21 foreign doctors who were unable to practise medicine here because of a policy that did not recognise their hard-earned degrees.

For 10 months, they participated in a fast-track course that took their experience into account while ensuring they complied with specifically German qualifications, including proficiency in the language.

Twenty of the 21 took the final examination, 17 of them passed and all but one of the graduates found work in the region.

“These people could not practise here before” due to the complexity of the diploma equivalency system, the chief integration official in Brandenburg, Karin Weiss, told AFP. “But doctors should be taking care of patients, not tidying up.”

Brandenburg’s programme is just the beginning. The German government on Monday announced plans to recognise foreign diplomas in a move that would allow for the recruitment of 300,000 more qualified immigrants to fill a yawning gap in the labour market.

Berlin aims to bring in new legislation by year’s end which would enable employers to hire substantially more foreigners, amid an explosive national discussion about the integration of immigrants.

The Chambers of Commerce and Industry says Europe’s top economy lacks 400,000 qualified workers, costing it one percentage point of economic growth each year.

Chancellor Angela Merkel underlined in a speech late Tuesday the need for Germany to address the problem, amid deep divisions in her own cabinet on the issue.

Merkel made waves Saturday when she said that Germany’s model of multiculturalism had proved an utter failure due to pervasive communities of immigrants who lived economically and culturally apart.

Thilo Sarrazin arguing in a best-selling book that Germany’s Muslim minority — 2.5 million of them of Turkish origin — was making the country “more stupid.”

In Brandenburg, where 128,000 people of foreign origin live, one in five has a degree. But these people often “have to accept work well below their qualifications,” Weiss said.

“Hardly any German doctors want to work in the Brandenburg countryside. There is a great need here — like in other places in Germany — but it is particularly dire here because salaries are lower in the east,” she said.

Immigrants such as gynaecologist Vadim Romanov and neurologist Mikhail Ermakov, both from Russia and participants in the Brandenburg programme, are happy Germany is finally giving them a real chance.

Now 26 foreign nurses are taking part in a nine-month qualification programme in Brandenburg. They will begin practical training in November and in January, another group, this time of social workers, will begin their own course.