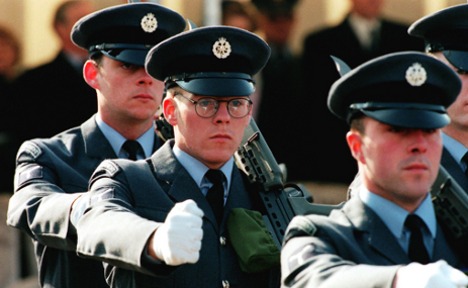 Cameron on Tuesday said London intended to remove the last British troops from German soil by 2020 – fifteen years earlier than many in northern Germany had expected.

The decision comes as the British government grapples with a huge budget deficit amid a restructuring of the country’s armed forces, which have had a presence in Germany since the end of World War II.

“We all knew this was coming, we just didn’t have the exact details until yesterday,” Helga Heine, a spokeswoman for British forces in Germany, told The Local.

With Britain already planning to pull its troops from Germany by 2035, Heine said UK defence officials would now determine how best to implement the accelerated redeployment. However, details were unlikely before mid-2011.

“We will work very closely with the German authorities,” said Heine, adding she had already been contacted by some concerned officials. “Naturally they hoped the British would stay longer, so that came as surprise. But we have a very good relationship with them.”

Bracing for the economic blow

British forces contribute an estimated €1.3 billion to the German economy each year. Some 20,000 soldiers and 23,300 dependants and UK civilian employees are joined by 4,650 locals working at 12 bases in North Rhine-Westphalia and Lower Saxony.

Rainer Prokop, the mayor of the town of Bergen near the Bergen-Hohne training area, admitted his community of 16,000 would be devastated by the British pullout.

“This is the most severe upheaval for us since the Second World War,” Prokop told The Local on Wednesday. “The British live among us, they are a part of everything here.”

He estimated the town’s population would drop by a third once the UK troops left and between 20 and 40 percent of local business could go under.

“We face a dramatic adjustment,” Prokop said, explaining that British officials had told him back in 2007 that Bergen-Hohne, along with Paderborn and Gütersloh, would remain important locations for years to come.

He said British soldiers and their families had yet to move into brand new apartments built in the centre of town and that the UK government had already signed 15-year rental agreements for them.

Paderborn’s Mayor Heinz Paus told The Local on Wednesday that Cameron’s announcement came as a shock.

“When 10,000 residents leave that’s really tough,” Paus said. “Over the decades we have developed very close friendships, there is a great cooperation, and that means we’ll be deeply affected by this.”

English on the streets

He said one often hears English spoken on the city’s streets, and there have been many marriages between British soldiers and Germans, with large numbers of families living on the local economy rather than on the military base.

“We’re looking at a loss of a several hundred million euros, which is a grave situation for the city,” Paus told The Local, adding that many German jobs connected to the British military would be lost.

While there had been widespread speculation the new British government would make such a decision to bring troops home, there had also been signals to the city even just a few months ago that pointed towards further growth of the community, according to the mayor.

“We were told there would be new investment in building at the different sites, and the British have invested quite a bit here in recent years with new engineering, apartments and so forth,” he said.

Once the city of 150,000 receives official notice of the troop withdrawal, Paderborn’s leaders plan to meet with their counterparts in the nearby community of Detmold, where British troops left some 15 years ago. According to Paus, the city struggled to find ways to re-purpose former British military locations.

He also stressed Germans would not be the only ones suffering from the changes, considering how well-integrated British families are in the local community.

“They really seem to like Paderborn and I imagine they will also be hit hard by this announcement,” he said.

Gütersloh Mayor Maria Unger also said the upheaval went beyond the economic impact of the troop withdrawal, citing the numerous shared educational, religious and athletic programmes with the British forces.

“There were no concrete plans on how to handle the withdrawal at a later date, but now city officials plan to meet in the coming weeks to discuss what this means for the region,” she said.

“They are our neighbours and they’ve made the society of Bielefeld richer,” he said.

Phil Welsh, editor of the Sixth Sense, a newspaper for British military personnel, said many communities were likely to be shocked by the speed of the withdrawal.

”It’s a setback for the local communities,” he said. ”The British Forces are seen as a major employer with soldiers spending a lot of money in the local shops. They will feel the pinch.

“There are a lot of German civilians – whether it’s gardeners, building repairers, vehicle mechanics, who work permanently for the British Forces Germany and they are obviously going to be worried about their jobs.”