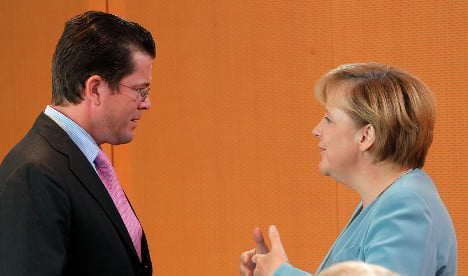 Nearly half of the respondents to the Forsa survey said they believed there was no difference between the politicians’ abilities, while just 14 percent picked Merkel as the better leader, Stern magazine reported.

The poll comes amid growing speculation that Defence Minister Guttenberg, a member of the Bavarian Christian Social Union (CSU), is likely to become leader of his party and has a strong chance to become the nation’s chancellor.

Some 23 percent of respondents to the Forsa poll preferred him to Merkel, the leader of the CSU’s sister party, the Christian Democratic Union (CDU).

This week’s issue of news magazine Der Spiegel featured Guttenberg and his wife Stephanie on the cover with the headline “The fabulous Guttenbergs” and raised the possibility that Guttenberg would succeed Merkel as chancellor.

Guttenberg, 38, is easily the country’s most popular politician at the moment – a title long held by Merkel. In a recent poll, his approval rating of 70 percent positively dwarfed her 40 percent.

Guttenberg himself has described suggestions that he might oust Merkel if the conservatives perform badly in state elections next year as “bizarre.”

“He is a person of integrity who works brilliantly in a team. Whether he now has to become chancellor is a phoney debate,” she told Der Spiegel.

The current economic growth and falling unemployment had been the “fruits of five years of sound government work under Angela Merkel,” she said. “And we are debating about the distant future.”

Forsa pollster Manfred Güllner said Guttenberg was winning the respect of voters for his independence and the fact he did not appear to be part of the “Berlin political circus.”

“The fact that he has pushed through reforms even against his own party strengthens this image,” Güllner said.

However Güllner stressed the recent speculation about Guttenberg’s leadership potential had been premature.

“Guttenberg is seen as a nice type but as to his fitness for the Chancellery, there are many question marks. So far he has not been seriously put to the test.”