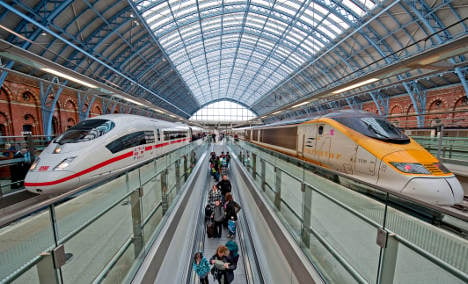 The high-speed ICE train made its first trip all the way through the tunnel under the English Channel overnight and was welcomed at London’s St. Pancras station by German and British officials.

The German rail operator wants to run regular services from the heart of Europe to London within three years, taking advantage of European Union rules that open up rail competition.

“We feel … that rail transport in Europe stands on the threshold of a new age,” said Rüdiger Grube, as he announced a bold timetable of trains connecting the British capital with major European cities.

“Three trains a day – in the morning, afternoon and evening – will connect Frankfurt and London via Cologne, Brussels and Lille in both directions,” said Grube at the station.

“For the first time, we want to link Amsterdam directly with London,” added the rail chief, estimating it would take five hours to travel from Frankfurt to the British capital and four hours from Amsterdam.

Deutsche Bahn’s aim is to rival short-haul European flight times – around 50 flights a day from Frankfurt and the surrounding area currently serve London every day.

Rail chiefs argue that considering most airports are situated outside cities, many travellers would choose a five-hour journey time by train from Frankfurt, Germany’s financial capital, to London over the same journey by air.

German Transport Minister Peter Ramsauer said linking Frankfurt to London by rail would be “a European success story, and a vision will become reality.”

Britain’s Rail Minister Theresa Villiers said passengers would be delighted if they could look forward “to reaching new European destinations in an easier, greener way from 2013.”

Deutsche Bahn needs to demonstrate its ability to run safely on the route, which is being opened up to competition under new EU rules, to the annoyance of France, which has so far dominated cross-Channel traffic.

The ICE train had made its inaugural test run last Wednesday, becoming the first passenger train not run by Eurostar – an operator jointly owned by France, Britain and Belgium – to use the tunnel.

Carrying drivers and technical staff from Deutsche Bahn and tunnel operator Eurotunnel, but no passengers, it went part of the way through the tunnel before turning back and re-entering France after 10 minutes. Overnight Monday, it went through the entire tunnel.