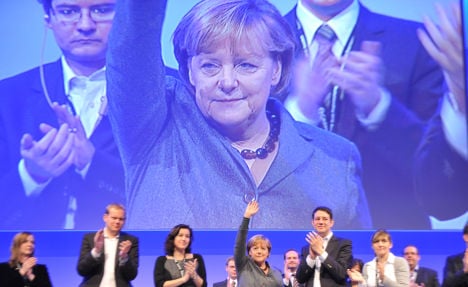 While warning against “immigration that weighs down on our social system,” Merkel said she wanted to see the immigration of highly-specialised experts to continue, backing Labour Minister Ursula von der Leyen.

But Merkel said immigrants had to understand the German legal system and speak the language. The multicultural approach had failed, she told the meeting of the youth wing of her Christian Democratic Union (CDU) in Potsdam.

Yet she referred to Federal President Christian Wulff’s speech where he said that Islam was a valid part of Germany, saying, “Those who ignore the fact that 2,500 Imams conduct their worship in mosques are kidding themselves,” she said.

Merkel’s straddling of the immigration and integration topics mirrored splits within her party.

Education Minister Annette Schavan contradicted Seehofer when she said, “It is not immigration that should agitate us, rather emigration out of Germany. If we don’t do anything against that, the lack of experts here will develop into a brake on economic growth.”

Von der Leyen said she wanted to make it easier for qualified workers to come to Germany to supply the needs of industry. “In any case these highly-qualified people are not waiting in crowds at the border. We have to make efforts to attract them.”

Seehofer, leader of the CDU’s Bavarian sister party the Christian Social Union, provoked concern on Saturday when he proclaimed multiculturalism to be dead.

He said the two union parties were committed to a dominant German culture and opposed to a multicultural one, expanding on his recent call to stop Turks and Arabs from moving to Germany.

Yet he said his speech was not a lurch to the right, rather an attempt to “stop the right-wing loonies,” he said, adding that “political seducers” must be deterred from parliament by addressing the concerns of voters.

Those who wanted to live in Germany had to be prepared to accept the daily culture of the country, he said, although did not specify how this should be defined.

Merkel spoke a week after talks with Turkish Prime Minister Recep Tayyip Erdogan in which they pledged to do more to improve the often poor integration record of Germany’s 2.5-million-strong Turkish community.

“When one doesn’t speak the language of the country in which one lives that doesn’t serve anyone, neither the person concerned, the country, nor the society,” Gül told the Süddeutsche Zeitung.

According to the head of the German chamber of commerce and industry, Hans Heinrich Driftmann, Germany is in urgent need of about 400,000 engineers and qualified workers.

“The lack is causing a loss of growth of about one percent,” he said.

Jewish leaders in Germany meanwhile warned that German society and democracy were under threat from extremists.

A recent expert study should prompt the government to act against anti-democratic ideas, the secretary general of the Central Council of Jews in Germany, Stephan Kramer, told the Rheinpfalz am Sonntag weekly.

The study, by the Friedrich Ebert Foundation think tank, showed that more than one third (34.3 percent) of those surveyed believed Germany’s 16 million immigrants or people with foreign origins came to the country for the social benefits.

Around the same number (35.6 percent) said they thought Germany was being “over-run by foreigners” and more than one in 10 called for a “Führer” to run the country “with a strong hand.”

Thirty-two percent of people said they agreed with the statement: “Foreigners should be sent home when jobs are scarce.”

Far-right attitudes are found not only at the extremes of German society, but “to a worrying degree at the centre of society,” the report noted.

More than half (58.4 percent) of the 2,411 people polled thought the around four million Muslims in Germany should have their religious practices “significantly curbed.”