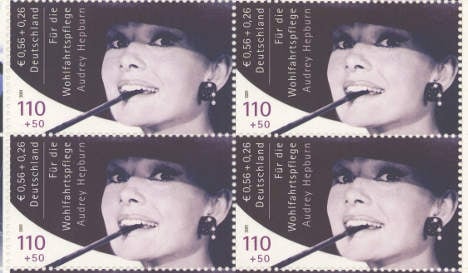 The stamps were printed in Germany nine years ago – without asking the permission of Hepburn’s son and heir Sean Hepburn Ferrer.

He refused retroactive permission as the picture showed his mother – who died of cancer – smoking a cigarette, and he felt the image was not terribly flattering as her eyes were hidden by a shadow.

At the time 14 million of them were printed, and had to be destroyed, yet a few were kept and found their way into the hands of collectors.

The set sold at the Adlon Hotel on Saturday belonged to Sean Hepburn Ferrer – he sold them to raise money for the UN children’s fund Unicef, and the Audrey Hepburn Children’s Fund.

“It is simply marvellous that a set of stamps with a face value of 16 Marks can be auctioned for €430,000 in the end and will serve a good purpose,” he said.

The set was bought by a bidder in the room who wished to remain anonymous.