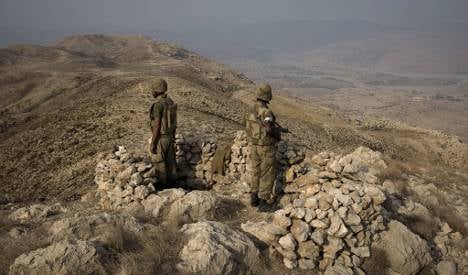 Pakistani soldiers at a watchpost in Waziristan. Photo: DPA

Friends said the German-Turkish man, who had worked for years on a farm between Velbert and Essen, had seemed to become radicalised two years ago.

The paper reported that it was only three weeks ago that he left for Pakistan, where his father-in-law works as a religion teacher, in order to study Islam.

He was killed along with two other men on October 4 in a farmhouse in the northern Waziristan region.

The others were preparing terrorist attacks in Western Europe according to testimony from a prisoner in American custody, although the WAZ said it was not clear whether the 20-year-old was involved.

The German Foreign Ministry would not comment, but people who know him have confirmed his death.

August Hanning, former head of the Federal Intelligence Service, told the WAZ that some 220 Jihadists had been given paramilitary training in Pakistan, half of which have returned to Germany.