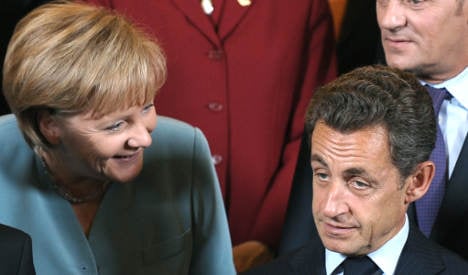 The trio will meet on Monday and Tuesday in the Channel resort of Deauville a month before the Nato allies meet to agree their new security vision.

No decisions are expected to be made, but observers will look for signs that Moscow and the West are ready to put decades of hostility behind them and commit to what optimists see as a common security vision “from Vancouver to Vladivostok.”

Some allies of France and Germany were annoyed to have been excluded from the get-together, concerned at the pair meeting alone with such a difficult neighbour, but diplomats have insisted the summit would defuse tensions.

“It’ll be a kind of brainstorming session, to get to the bottom of thoughts and second thoughts,” said a senior official at Sarkozy’s Elysee Palace.

“Russia seems to be looking more and more towards the West, and Deauville will be a chance to reinforce this development, which we see as positive.

“Russia seems to have rediscovered the merits of having a cooperative attitude with the West,” said the aide, a close advisor to Sarkozy, speaking on condition of anonymity to set the stage for the leaders.

French officials cite the examples of Russia’s signing a new nuclear arms reduction treaty with the United States, its cooperation on the Afghan crisis and its “scrupulous” application of the latest sanctions against Iran.

Some other Nato allies, in particular the former Soviet satellites in Eastern Europe, remain suspicious of their prickly neighbour, pointing to the 2008 war in Georgia and some of Moscow’s more bellicose pronouncements.

British ties with Russia have been strained by Moscow’s refusal to extradite a suspect in the murder in London of a former Russian agent, and by commercial disputes over British oil giant BP’s investments in Russia.

And in recent years the United States has been at loggerheads with its former Cold War foe over its plans to site a missile defence system in Europe.

But while Russia’s ties with Nato as a whole have often been difficult, the Kremlin has proved adept at dealing directly one-on-one with European powers, in particular France and Germany.

Other Western allies have expressed concern over France’s attempts to sell Russia a fleet of modern amphibious assault ships and Germany’s involvement in a Baltic gas pipeline that will increase its reliance on Russian energy.

French officials admit their warm relations with Russia remain “fragile”, but insist that if handled correctly, Moscow can be brought on board as a true partner in NATO in Europe-Atlantic security.

The Alliance will unveil its new security concept next month at its summit in Lisbon, and Western leaders hope Medvedev will confirm in Deauville that he will attend the meeting and give his support to their vision.

“I think the conditions have come together for a serious partnership with Russia, and that we don’t consider her definitively as an enemy,” said German diplomat Wolfgang Ischinger, organiser of the internationally-respected annual Munich security conference.

In Moscow, Medvedev’s top foreign policy advisor confirmed that closer ties with Nato would be on the agenda in Deauville, including Russia’s long-term goal of a formal new joint European security framework.

“Promoting Dmitry Medvedev’s initiative – the European security treaty – is naturally of priority significance for us,” Sergei Prikhodko told reporters at the Kremlin ahead of the summit.

Talk of a specifically European security treaty will not please Washington, the main player in the Nato alliance and a guarantor of European security since World War II, but France will seek to reassure the Americans.

“They are irreplaceable, but it’s not forbidden for Europeans to talk about security among themselves,” the Elysee aide said.

Sarkozy and Merkel will meet each other to harmonise their own positions on Monday before meeting Medvedev for dinner on Monday evening, with the main work of the summit following on Tuesday.