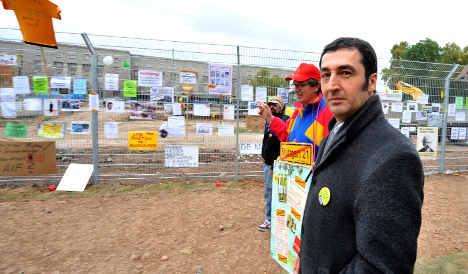 Green Party co-leader Cem Özdemir and singer Konstantin Wecker are among those who said they would march.

“Obviously Herr Grube believes a mediation is no more than a bit of a distraction for the opponents. He escalates, provokes, polarises. And he undermines every mediating suggestion from Herr Geißler,” Trittin told the Bild am Sonntag weekly.

Trittin said it was crucial that construction or demolition work be halted during the mediation phase.

“No de facto decisions can be made during the mediation process. Therefore Grube cannot award a contract for €800 million for tunnel construction. This would simply create tomorrow’s compensation claims,” said Trittin.

Opponents of the multi-billion-euro project – which would transform much of Stuttgart’s city centre, turning its historic train station into a transit hub for long-distance routes – have called for a referendum on the matter.

But Andreas Voßkuhle, president of the Federal Constitutional Court, told the Süddeutsche Zeitung he did not think that was a good idea.

“A retroactive referendum would present a serious problem for the realisation of infrastructure projects,” he said.

“A line must be drawn at some point, at least when the highest courts have decided on a project. Otherwise we lose our ability to move forwards. There may be exceptions to this, but these should not be the rule.”

Centre-left Social Democrats head Sigmar Gabriel called again for a referendum, saying he thought all those in the state of Baden-Württemberg should get a chance to vote, not just those in Stuttgart.

Stuttgart 21, “is not proof of the ungovernability of Germany, but simply of bad government in Germany,” he said.

Gabriel added that he was not convinced people in the state would vote against the project, saying one could not call for transport to be increasingly rail-based and then protest at every new rail project. This was where the SPD differed from the Greens, he said.