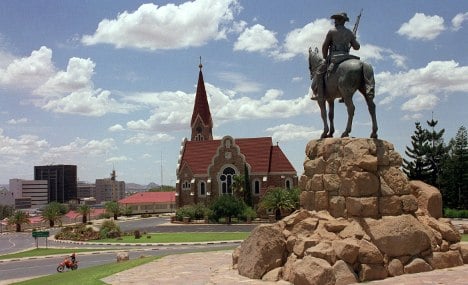 Church bells ring out exactly at noon in the heart of Namibia’s sleepy capital Windhoek, still precise 100 years after the church was built as an emblem of Imperial Germany’s colonial reach.

“It is like being at home. It is wonderful to hear these beautiful bells here in Namibia, nearly 10,000 kilometres away from Germany,” said tourist Annelise Schmieder from Stuttgart.

“I am thrilled that I could see the Christuskirche” said Schmieder, standing on the steps of the sandstone Church of Christ and glancing up at the 42-metre tower on a hill overlooking the city.

The Lutheran church was consecrated on October 16, 1910 after a tumultuous period of construction that mirrored the upheaval of Imperial Germany’s conquest of a land then known as South West Africa.

Germany staked its claim to the region in 1884 and the site for a Protestant church was allocated 14 years later. Colonial government architect Gottlieb Redecker drew the building plans in 1901.

But construction was delayed by the tumult that accompanied colonisation, with the indigenous Herero and Nama people resisting for years in a bloody conflict that ended only with Germany’s notorious “extermination order.”

Tens of thousands of people were killed and only a fraction of the Herero and Nama populations had survived when the campaign ended in 1907.

The church rose with Germany’s victory, with most of the materials shipped from Europe down the Atlantic and then transported by a narrow gauge rail link from the small port of Swakopmund over the 370 kilometres to Windhoek.

Fitted into the steeple were three bronze bells cast by Franz Schilling in Apolda, Germany.

Then-emperor Wilhelm II donated three stained glass windows to decorate the chancel of the 400-seat church, which is laid out like a basilica with an aisle and a gallery on the northern side.

The west-facing entrance with six columns is built of Carrara marble imported from Italy.

The organ was built by the company Walker in Ludwigsburg, Germany. The Windhoek town council donated the tower clock.

The original altarpiece is a copy of “The Resurrection of Lazarus,” by baroque artist Peter Paul Rubens.

The original painting by the Flemish master was destroyed by fire in Berlin in 1945, meaning Windhoek’s is now the most authentic replica.

Building expenses eventually came to 360,000 marks, double the initial estimate and a fortune at the time.

Over the years, a new organ was built by a South African company and the stained glass windows were renovated.

A German art expert touring Namibia in 1998 noticed the new windows were accidentally fitted backwards during construction, with the glass facing the wrong way. It removed between 1999 and 2000, repaired and refitted correctly.

A special church service will be held Sunday to commemorate the centenary for what in modern Namibia is a major landmark and a repository of history and language for the 30,000 people of German descent in the country, whose official language is now English.

And what will the next 100 years bring?

“The German language will remain anchored in Namibia and in our congregation,” said Bishop Erich Hertel.

“Our priority as a church is not to stick to one language, but to distribute the message of God,” he told AFP.

“We are grateful that the Lord provides us with new challenges, even if that means to accept another language. The German Lutheran congregations in South Africa found solutions to this, we in Namibia would have to find our own.”