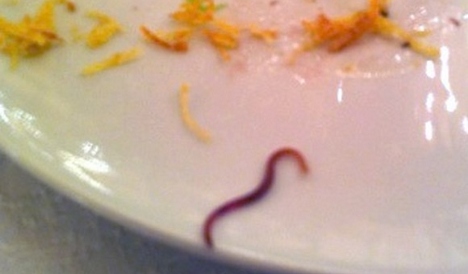 The incident came to light after a Russian regional governor, evidently finding the matter hilarious, wrote a Twitter entry about the worm and linked to a photo. The governor, Dmitri Zelenin, has been branded an “imbecile” and could now lose his job, The Moscow Times reported.

Zelenin, 47, former head of the giant mining company Norilsk Nickel, has since removed the blog post and photo. In the original post, Zelenin quipped of the worm: “It was a very special way to show the salad was fresh.”

The invertebrate salad was served at a dinner at the Kremlin on Tuesday night in honour of Wulff, who is on a state visit to Russia. He has met with Russian President Dmitry Medvedev and Prime Minister Vladimir Putin.

In the photo posted by Zelenin, who is governor of the Tver region in western Russia, a worm is clearly crawling on the edge of the plate. It is not known how Wulff reacted.

Sergei Prikhodko, an aide to President Medvedev, called for Zelenin to be sacked. It should be possible by law to fire a governor because of “imbecility,” he said.

“Fortunately, I’m responsible for foreign policy questions, but I should probably suggest to my colleagues who are dealing with the law to introduce to the criteria for evaluating governors a line on ‘termination for imbecility,'” said Prikhodko, according to The Moscow Times

“I won’t even comment on irresponsibility and foolishness,” he said.

Medvedev has the power to hire and fire the 83 regional governors in Russia.

Anatoly Galkin, the Kremlin’s head chef, brushed off Zelenin’s allegation as “nonsense” in an interview to Lifenews.ru.

All dishes served in the Kremlin “go through a very careful examination,” Galkin said, adding that he was on vacation and could not personally look into the matter.