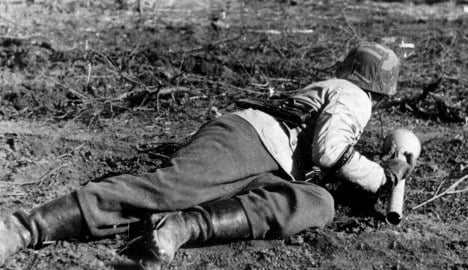 The cache was buried just 1.8 metre below ground – though a layer of concrete that had been lain above the weapons since the end of the war meant there had been little danger to children at the centre, an expert said.

Weapons specialists examined the grounds of the Kita after an examination of aerial pictures had shown there could be undiscovered WWII weapons in the area.

“Guns protruded from the soil,” expert Thomas Dittschlag told the paper. “We dug it all out carefully by hand.”

There were no actual bombs. But detonation expert Peter Seydel it was a “very dangerous cache, with great explosive force.”

In particular, the two Panzerfaust grenade-launchers – neither of which had decayed to the point at which they were safe – were of major concern.

He said studies of old aerial photographs showed there had been a bomb crater at the site, into which German troops may have thrown their weapons at the end of the war.

“At the end of the war, home defence troops had supposedly thrown away their weapons into it. But they laid a concrete slab over it – so there was never really a danger for the children.”

Locals were nevertheless unamused. “By the time the Kita was built and the playground put down, things like this had to have been investigated,” resident Eva-Maria Kaltenbach told Bild. “It was known that battles were fought here in the war. It’s terrible that it’s only happened now.”