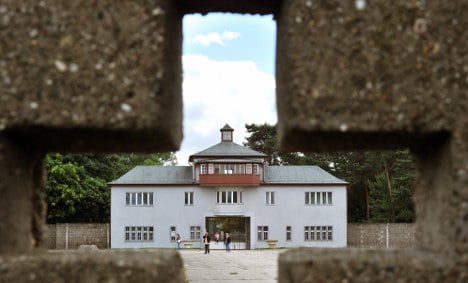 A view of the camp through an East German addition. Photo: DPA

“It’s what the survivors have long been waiting for,” said Sonja Reichter, secretary for the International Committee of Sachsenhausen.

Large portions of the project, which aims to preserve the traces of the camp’s Nazi past, as well as how the East German government used it for a politically charged national memorial, have been delayed since 2005.

Renovations of the camp entrance and the central memorial site “Station Z” began after reunification in 1993, but the project ran into resistance from preservation authorities because portions of the East German memorial would not be reconstructed.

“Both sides of Germany imposed their own interpretations on Second World War memorials,” director for the state of Brandenburg’s memorial foundation Günter Morsch said.

Results at Sachsenhausen were communist East Germany’s construction of an artificial camp entrance and a curtain wall that blocked the existing watchtower system. Instead of preserving original buildings at the camp in Oranienburg, East German planners destroyed many of the remaining Nazi buildings and built a large memorial complex meant to symbolise the “victory of anti-fascism over fascism.”

Both Morsch’s committee and former prisoners at the camp, which was used primarily for political prisoners between 1936 and 1945, disliked East Germany’s contribution, and opted for plans by architect Hans-Günther Merz, who did not include restoration of the memorial.

But other officials disagreed, insisting that the camp’s entire history should be preserved.

“That put the building application on ice,” Morsch said.

State officials have finally given the green light for the project, however, and organisers expect it to be finished in 2012. The new plan integrates both eras, with traces of the East German memorial incorporated into those of the original camp, respecting existing structures, Morsch said.

“We’ve only intervened where the authentic sites where no longer recognisable by essential characteristics,” state monument protection official Detlef Karge said. “We will observe closely to make sure any traces are not destroyed or changed.”

The 400-hectare site of Sachsenhausen bears witness to the gruesome treatment of both political dissidents and later Soviet prisoners of war. An estimated 200,000 people were imprisoned there by Nazis. Tens of thousands died of hunger, sickness, forced labour, mistreatment and systematic murder.

After the war, the camp was located in the Soviet-occupied zone, and was converted into an internment camp for people with Nazi ties and those deemed dangerous to establishing communist control in the east. Thousands died there of disease and malnutrition before the camp, called an “NKVD special camp,” was closed in 1950.