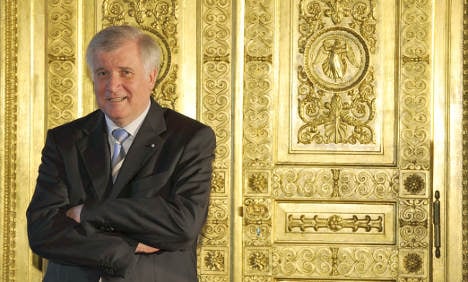 Seehofer, who belongs to the CSU, the Bavarian sister party of Chancellor Angela Merkel’s Christian Democrats, told news magazine Focus that “immigrants from other cultures, such as those from Turkey and Arab countries have more difficulties” integrating into German culture. Therefore he had drawn the “conclusion that we need no additional immigration from other cultural areas.”

On Monday chairman of the Turkish Community in Germany (TGD), Kenan Kolat, demanded an apology.

“The latest comments by Seehofer are defamatory and unacceptable,” he told daily Berliner Zeitung, speaking of an attempt to stigmatise certain ethnic groups and trump former Bundesbank board member Thilo Sarrazin’s inflammatory assertions about Muslim immigrants.

Meanwhile politicians from across the spectrum expressed their dismay over Seehofer’s suggestion.

Germany’s Christian Democratic commissioner for integration, Maria Böhmer, said she was “very shocked,” while Seehofer’s fellow CSU party member and parliamentary liaison at the Interior Ministry Ole Schröder accused Seehofer of trying to talk around his own state’s problems with integration.

Opposition parties the environmentalist Greens and the centre-left Social Democrats accused the Bavarian leader of pandering to far-right populism.

But other members of Seehofer’s Christian Social Union defended him. Head of the CSU’s parliamentary group, Hans-Peter Friedrich, told daily Hamburger Abendblatt that his party leader was “absolutely right.”

Instead of allowing more immigrants from abroad, Germany should focus on bringing in other European workers, he suggested.

“These people are easier to integrate into Germany than those who come from foreign cultural groups,” he said.