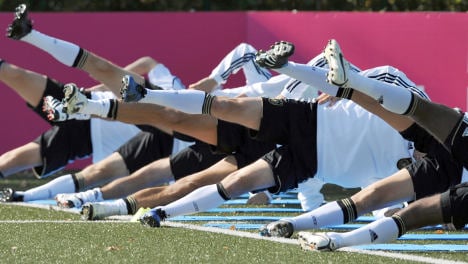 The sides, who have never met before at international level, are currently in diametrically opposite positions in their Group A table.

World Cup bronze medallists Germany maintained their perfect record with a confident 3-0 home win over Turkey on Friday as Kazakhstan suffered their third consecutive defeat at the hands of Belgium.

Tuesday’s match at Astana could be the last test for Stork, who has been working in the Central Asian republic since autumn 2008.

The 47-year-old had been set a task of collecting three points against Belgium and Germany but after Friday’s defeat this mission looks unrealizable.

Stork, however, believes that anything is possible for his team at home.

“Germany are almost the perfect team with a flawless game,” he admitted. “But in one single game everything is possible and we shall do our best to produce a miracle on October 12.”

Whatever the outcome he insisted that he remains committed to the Kazakh team.

“I can resign, it’s not a problem,” Stork said. “However, the matter doesn’t concern me. We’re speaking about our main goal: to make the Euro-2016 finals. Our young players have already collected vital experience. Our team is a team for the future and we need to be patient.”

Kazakhstan will however be without several first-line players on Tuesday.

Defender Alexander Kislitsyn will miss the tie after being sent off against Belgium as will midfielder Andrei Karpovich.

But they can take heart as Germany have also suffered losses with former captain Michael Ballack still unavailable with injury along with Bastian Schweinsteiger.

Midfielder Mesut Özil is also an injury doubt after limping off at the end of the Turkey game with an ankle injury.

Germany have however been buoyed by their win over Turkey.

Germany skipper Philipp Lahm added: “It’s impressive how well the team is playing at the moment. Nine points from three games and now we have defeated our strongest opponent in the group.”