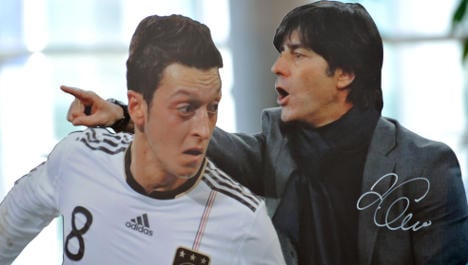 Löw’s young guns beat main Group A rivals Turkey 3-0 in Berlin on Friday to top the group, having scored 10 goals and conceded just one, and now travel to face Kazakhstan who have three defeats.

After finishing third at the World Cup, the Germany team has continued its eye-catching form from South Africa into their Euro 2012 campaign, but Löw says the challenge is now to pick up a result in Astana.

“We have started well, but there is still a long way to go,” the 50-year-old told German daily Bild.

“We solved the problem of how to beat Turkey and deserved to win, but we must continue that momentum.”

Normally a cool and collected figure on the sidelines during Germany games, Löw showed a rare display of anger on Friday night when Cologne striker Lukas Podolski fired wide of the goal with Germany protecting a slender 1-0 lead.

“It was a critical stage in the game,” explained Löw.

“We were 1-0 up, but the Turks were pushing for an equalisier and the goal would have calmed the game for us; that is why I got so annoyed.”

Talented midfielder Mesut Özil is Germany’s main injury doubt for the trip to Kazakhstan and will have a fitness test on Monday to see if he can play.

The Real Madrid star scored the second goal against Turkey, but was replaced in the 90th minute as he struggled after injuring his left ankle in a clash with Turkey’s Servet Cetin.

Özil did not train on Sunday, but both the player and coach are optimistic he will play.

“If the ankle continues to improve, he should be able to train with the team on Sunday,” said Löw.

The 21-year-old is eager to face Kazakhstan, ranked 119th in the world.

“I still have pain in the ankle, but I trust the excellent treatment from our national team doctors and physiotherapists,” he said.

“I hope that I will be fit and I want to play.”

If he fails to make it, Werder Bremen’s Marko Marin or Bayern Munich’s Toni Kroos will take his place in the middle of Germany’s attacking midfield.

Born-and-bred in Germany to Turkish parents, Özil was booed every time he touched the ball on Friday at Berlin’s Olympic Stadium and Löw praised the youngster for showing a cool head.

“It was certainly not an easy situation for him,” admitted Löw.

“He’s really strong nerves. He has Turkish parents and has roots in Germany and Turkey.

“He was absolutely delighted with both the goal and his victory in the changing room afterwards.

“I had no doubts about playing him, I had a long talk with him before the game and felt that his situation would not be a factor.”

“Waiting for us is an arduous journey, a few hours in the air and a four hour time difference,” he said.

“That won’t make it easy and I am convinced that my team will be up against the same fighting spirit the Turks showed in Kazakhstan.”