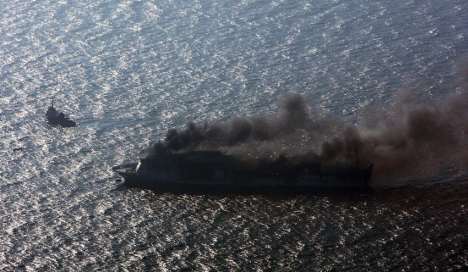 249 people were rescued from the ship in the early hours of Saturday in dramatic scenes after an explosion started a fire which could not be brought under control.

Those transferred onto the German ferry Deutschland included a number of young children. It was reported that 28 people were injured, three seriously.

“We were really scared, there was the fire and it was dark and cold. Who knows what would have happened if we had slept for just a couple of minutes more,” said a 29-year-old truck driver identified only as Edmundas, who was on the boat.

Click here for a gallery of pictures of the ferry drama.

A crew member making routine checks had found smoke coming from a lorry and tried to extinguish the fire, according to Joachim Gutt, from the Schleswig-Holstein Interior Ministry.

By Saturday morning the 200 metre long ferry which had left Kiel for the Lithuanian port of Klaipeda late on Friday night, was a burning hulk drifting towards Denmark.

A team of experts was dropped on board by helicopter to drop the ferry’s anchor, which halted its drift about four kilometres from the Danish island of Langeland. This means the Danish authorities will now be responsible for getting the boat to shore.

Four special oil spill boats have been near the ferry since Saturday, ready to intervene should there be any risk of pollution, but the Danish ocean rescue service SOK, which is in charge of the operation, reported on Sunday there was no leakage. The ferry had 200 tons of heavy oil as well as 18 tons of diesel and 25 tons of machine oil on board.

Fire fighting boats directed water cannon onto the ferry’s hull all Saturday night to keep it cool enough so it did not break apart.

“The ship is stable and at anchor. Absolutely no oil has leaked,” the SOK commander said, confirming that the fire on board was out.

“We think it went out on its own,” he said. As soon as the ferry has cooled down enough, a team of fire fighters will board it to check for hot spots where fire could break out again, but it is not known how long it might be before this is possible.

A team from a specialised Dutch salvage firm is on its way to the scene to work on a plan to recover the ferry.