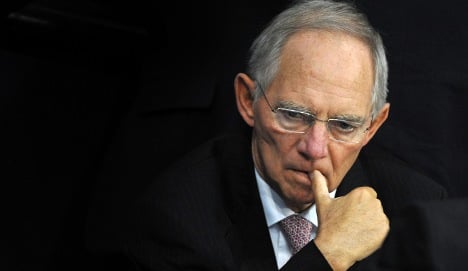 His office confirmed to the weekly Bild am Sonntag that Schäuble would be visiting the Trade and Industry Guild in Heilbronn on October 29, as scheduled, the first official appointment since he was admitted to hospital last week.

Schäuble, 68, who was left a paraplegic after an assassination attempt nearly 20 years ago, has suffered increasingly poor health recently, with his stays in hospital amounting to three months this year alone.

He had surgery early this year to install a system to regulate his digestive tract but the incisions have not healed well and have been complicated by bedsores.

Now questions are being asked about how much longer Chancellor Angela Merkel can allow for one of the country’s most important ministers to be so frequently absent.

In May, an allergic reaction to new medication meant Schäuble had to be taken to hospital during a make-or-break European summit just as Greece’s debt problems pushed the 16-nation eurozone to the brink of collapse.

This left Jörg Asmussen, highly regarded but a civil servant by training and a member of the opposition Social Democrats to boot, to represent Germany’s interests in Brussels.

Interior Minister Thomas de Maiziere, Merkel’s trusted chief of staff in her first term, was rushed in. Reportedly a military transport plane had to come and get him from a hiking break in the back of beyond.

Asmussen is replacing him in Washington at the International Monetary Fund’s annual meeting this weekend, a get-together dominated by talk of a damaging global currency war.

At the upcoming meeting of the Group of 20 emerging and developed economies in South Korea, meanwhile, Economy Minister Rainer Brüderle will stand in for Schäuble.

Schäuble has a wealth of experience, having risen through the ranks to be former chancellor Helmut Kohl’s chief of staff and one-time heir apparent and hold several ministerial positions.

Any ambition for the top job was sunk by his involvement in a murky party financing scandal that all but destroyed Kohl’s reputation in the 1990s, leaving Schäuble in the political wilderness for years.

But he made a comeback when Merkel was elected chancellor in 2005, first as interior minister and since October in his present job.

The German government insists that Schäuble can continue to do his job from his hospital bed, even giving interviews to the media in his pyjamas.

Loyal colleagues are also at pains to stress how hard he is continuing to work. “I have spent several hours on the phone this week with Wolfgang Schäuble. Whoever tries to spread the idea that the minister is tired of office is talking pure rubbish,” said, his parliamentary state secretary Steffen Kampeter told the Bild am Sonntag.

But serious questions are starting to be asked. Not only have his absences at important international gatherings raised eyebrows, Schäuble is also meant to be balancing Germany’s books after the worst recession since World War II.

Last week, speculation rose to fever pitch after Stern magazine reported that Schäuble had offered to resign but that Merkel had persuaded him to stay on, or at least to think it over.

At a regular government briefing, his spokesman Michael Offer did his best to fend off a barrage of questions.

Then his telephone beeped with a message from the bedridden minister instructing the spokesman to refute the report; Schäuble had “neither offered his resignation nor talked about a delay for reflection,” he said.

But if Schäuble has any more enforced absences, “resigning would be the right decision,” the Financial Times Deutschland wrote in an editorial.