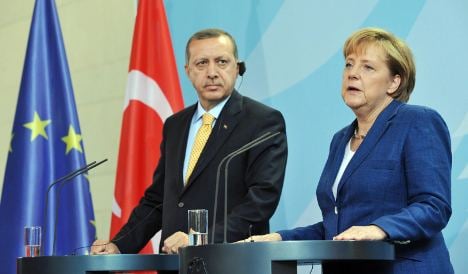 “This will be an opportunity for me to see if Germany can play a helpful role in resolving the difficulties that there are,” Merkel said after talks with Turkish Prime Minister Recep Tayyip Erdogan in Berlin.

Erdogan said progress towards Turkey joining the EU “should not slow down,” and that he had asked Merkel for Germany’s support. Merkel reiterated her position that the process had an “open end.”

The Cyprus situation is “important for us all, primarily in issues of security cooperation between NATO and the EU. Both sides have an interest in this, but of course there has to be movement on both sides,” Merkel said.

Turkey has blocked closer security cooperation between NATO and the EU amid long-standing, entangled problems with Greece and Cyprus, which have in turn hampered Turkey’s own efforts for closer ties with EU institutions.

The eastern Mediterranean island has been divided into a Turkish north and Greek south since 1974 when Turkey invaded and occupied the island’s northern third in response to a Greek Cypriot coup.

The internationally recognised Greek Cypriot south joined the EU in 2004. Turkey refuses to recognise the Greek Cypriot government and instead acknowledges the breakaway Turkish Cypriot statelet in the north.

The impasse, with Turkey refusing to open its ports to traffic from Cyprus, is a key stumbling block in its efforts to join the EU. Turkey began accession negotiations in 2005 but eight membership “chapters” remain frozen.

Germany, together with fellow EU heavyweight France, is cool on the idea of the mainly Muslim country of some 73 million people joining the bloc, preferring instead a “privileged partnership.”

Erdogan complained during a visit to Bulgaria on Monday that the EU was putting up hurdles to Turkey’s accession.

Merkel and Erdogan also pledged to do more to improve the often poor integration record of Germany’s 2.5-million-strong Turkish minority.

Germany would use celebrations in October 2011 for the 50th anniversary of a key immigration agreement on “Gastarbeiter” (“guest workers”) between Germany and Turkey to “take stock,” Merkel.

“We propose that everywhere in cities and towns where there are people of Turkish origin, we use this event as a way of taking stock and seeing where we are and what has to be done,” Merkel told reporters.

“There are clear problems still which we want to solve when it comes to integration. On the Turkish side there is a large desire to help as much as it can, and to stand by our side in a constructive manner.”

Erdogan he would attend events marking the anniversary of the 1961 agreement, which saw West Germany allow in large numbers of Turkish immigrants to provide workers for its postwar “economic miracle.”

“I am of course in favour of people of Turkish origin here in Germany integrating, for their own happiness, and for the happiness and future of German society,” Erdogan said.

“And if they have been in Germany for 50 years, then this is obviously required, so that people can live together peacefully.”

Merkel’s government acknowledges that it has considerable work to do, with statistics showing that immigrants do worse at school and in the labour market, exacerbating feelings of social exclusion among young Muslims, experts say.